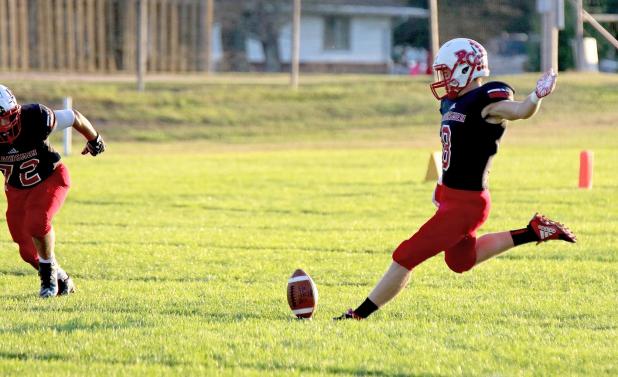 Fullback Tanner Burge, a senior at PCS, is out for the season after injuries to his knee during Friday night’s game against Hitchcock County.

Injuries took a heavy toll on the Perkins County Plainsmen Friday night in a 38-60 loss to the Hitchcock County Falcons.

The Plainsmen lost senior fullback Tanner Burge to a season-ending knee injury less than five minutes into the game.

As more experienced players went down, Head Coach Jonathan Hunt called on his younger players to fill the holes. As Hunt put it this week, the Plainsmen “had more holes than we had corks for.”

The Plainsmen held a 32-22 lead at half but Hunt said they were more focused on repositioning players than enjoying the lead.

Junior Alex Patrick scored the last touchdown, a 53-yard run that cut right through the heart of the Falcon defense, two plays into the third quarter.

His score would give the Plainsmen a 38-22 lead that would later evaporate as Perkins County lost players.

Patrick would leave the game along with freshman end Hayden Foster.

By the time the game ended, Hunt said they finished with nine players who could go, many of whom were freshmen.

“They fought to the end,” Hunt said proudly, noting he was impressed with his freshmen. “We had players playing in positions they’d never played before.”

Hitchcock County began to take advantage of their size and experience in the second half. They put up 16 points in the third quarter and another 22 points in the fourth to claim the win over the Plainsmen.

The Plainsmen started off strong Friday, scoring on their first two possessions. The first came after the Plainsmen stuffed the Falcons on a fourth down conversion attempt inside their own 25.

Three plays later, Burge would score from a yard out but would get hurt on the two-point conversion.

The Falcons pinned the Plainsmen at the PC 3-yard line. After a pair of runs yielded a yard each, Hunt went to the air.

Hite found Jaxon Livermore behind the defense for a 75-yard scoring strike and 16-0 lead following the conversion.

The Falcons got on the board with 18 seconds left in the first quarter on a 53-yard run. A failed conversion left the Plainsmen up 10.

In the next two minutes, both teams would each add a pair of touchdowns.

Patrick scored on runs of 13 and 59 while the Falcons added scores on runs of 20 and 37 yards.

At half, the Plainsmen still held a 32-22 lead but the tide turned in the third quarter, leading to the final score of 38-60.

Despite the loss, Hunt felt his team proved to be the more physical team for most of the game.

It turned out to be one of those nights for the Plainsmen where players got hurt and the Falcons took advantage of it, he noted.

The Plainsmen get a week off this week, which couldn’t come at a better time for the team.

He said this will allow his players to get healthy over the next week.

He’s hoping that most everyone can get back to 100 percent by the time they return to the field the following week. Sept. 21 is PC’s homecoming and the team will play Morrill at Haenfler field at 6 p.m.