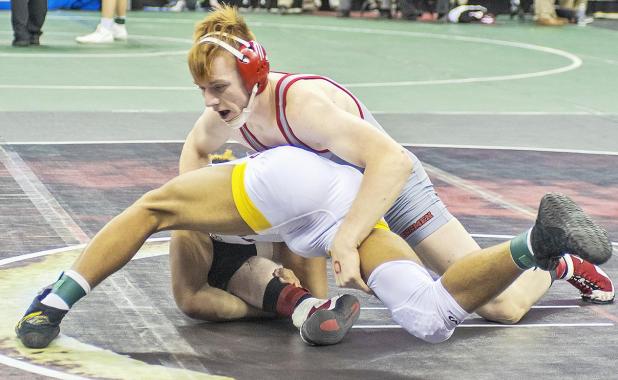 Jace Wid maneuvers for position in his first round consolation match at the state tournament last week against Isaiah Parsons of Contestoga. Wid claimed a 6-3 decision in the match. 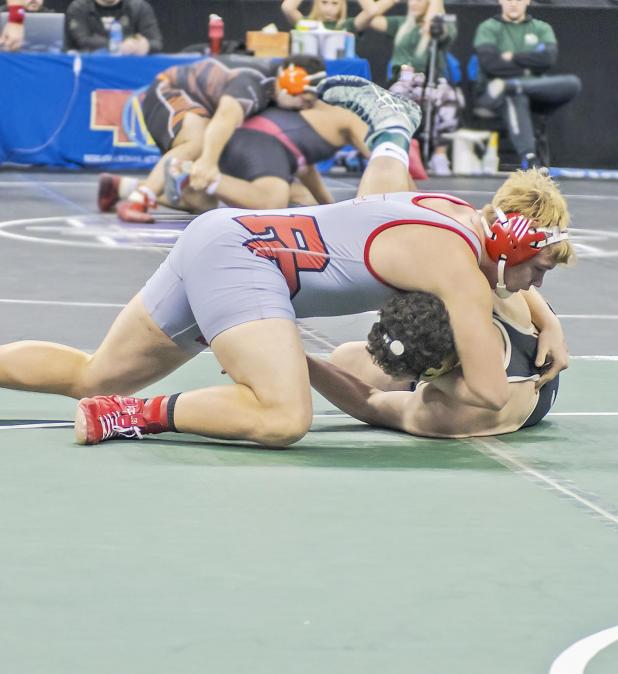 Brandon Knoles needed just 25 seconds to put Coy Meysenburg of David City Aquinas on his back for the pin in his first round consolation match at last week’s state tournament.

Knoles, Wid each get one win at state

For senior Jace Wid, the state wrestling tournament provided a great way to close out his wrestling career at Perkins County.

For junior Brandon Knoles, he pockets some valuable experience in his quest to return there next year.

While both Wid and Knoles lost their opening matches, they came back to win their first round in the consolation bracket before bowing out in the second round.

He said Wid had to battle through some injuries late in the season and went into the state tournament a little beat up.

Still, he said Wid fought through that and came away with a win before being eliminated.

Wid lost to Louisville’s Dylan Jones in his opening match. Jones (50-4) went on to claim third at 160.

In his second match, Wid came away with a 6-3 decision over Isaiah Parsons (37-18) of Contestoga.

He then lost a 3-1 decision to Fillmore Central’s Gavin Hinrichs (47-12), who went on to finish fifth.

He finished with a 22-7 season record.

Collins said Knoles came out and wrestled aggressively in every match.

He said Knoles matched up well in his bracket but made some mistakes in his two losses that got him on his back, leading to falls.

That’s the kind of experience that he can build on next year, Collins noted, finishing with a 44-14 season record.