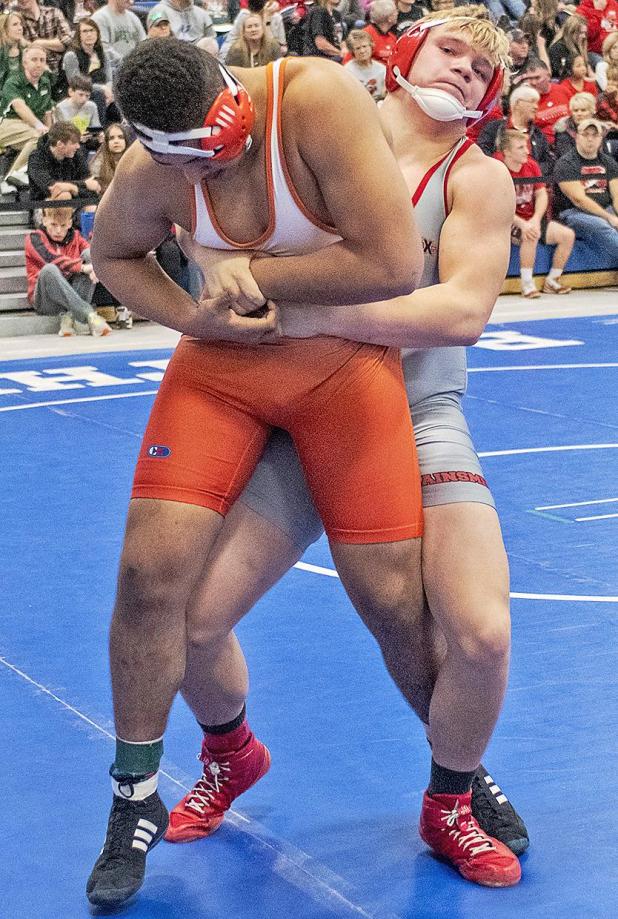 Junior Brandon Knoles and senior Jace Wid will wrestle at the state tournament in Omaha next week after qualifying in last week’s C4 district tournament in Hershey.

Knoles won his third place match to punch his first-ever ticket to Omaha.

Wid qualified for state his freshman year and will close out his career with a trip to Omaha as a senior.

Wid came back for districts after being injured at Chadron last January. He then missed a week of physical therapy due to illness.

Coach Tanner Collins said Wid worked on the bike to help stay in shape. He practiced very lightly last week to avoid any injury before the district meet.

Wid finished fourth in districts at 160 to earn his trip to Omaha.

After a bye in the first round, Knoles lost in the quarterfinal so had to wrestle his way back to the consolation final.

He did it in style, pinning his next three opponents to get back to the third place match.

After being tied 1-1 with Mitchell’s Nathan Coley after the third period, Knoles got the takedown in overtime for the sudden death win.

In the semifinal, he suffered a slight injury to his hip flexor, Collins said, and fell down to his back. His opponent was awarded two points, to lead 4-0.

Wid came back to add four of his won points but ultimately went down in a 7-4 decision.

That sent him to the heartbreak round where he would face the opponent he defeated in the first round, Isaac Hood of Ainsworth.

This time he won a 4-1 decision over Hood to move into the consolation final and ensure himself a trip to Omaha to close out his career.

He lost a 4-2 decision in consolation final to finish in fourth. Collins said Wid wrestled his way through some pain to get his state berth.

The top four wrestlers in each weight class qualify for the state tournament.

Collins said three other Plainsmen were one win away from punching their ticket to Omaha.

Colton Pouk at 138 won his first two matches, including a sudden death win in his opener.

Pouk lost a 11-9 decision in the semifinals and suffered a pin in the consolation semis to end his hopes.

Kannon Palu fought his way back to the consolation semis at 182 after running into 50-0 Lathan Duda of Broken Bow, who is rated No. 1 in the state.

After winning his next two to get back to the heartbreak round, he ran into the third-rated wrestler in the state, Amherst’s 42-4 Cole Stokebrand, and was pinned to end his chances.

Heavyweight Ashton Meyer won his first match in a tiebreaker after neither wrestler won in overtime. However, he went down in the second round to send him to the consolation bracket.

He won two matches to earn his way back to the heartbreak round but suffered a pin to end his season as well. Collins said both of his qualifiers drew winnable opponents in the first round.

Wid drew Dylan Jones of Louisville, who comes in with a 46-3 record.

Knoles will face Jon Matulka of Bishop Nuemann in Wahoo. He comes in with a 36-6 record.

District results are as follows: