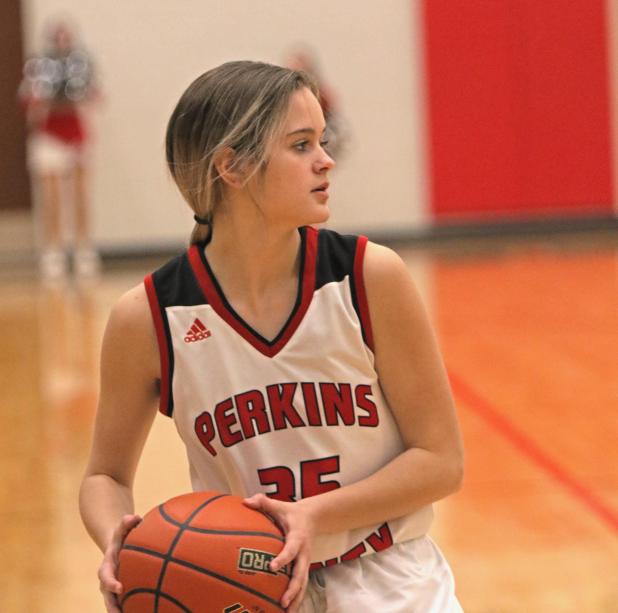 Junior Autumn Anderson searches for a teammate to pass the ball at last Tuesday’s home game against Creek Valley.

Perkins County closed out the regular season of girls basketball with a home game victory over Creek Valley Tuesday, Feb. 9.

She sank one of her two free throws, putting the first point on the board for Perkins County.

Just a few seconds later, junior Meghan Bishop was also fouled at the basket. She, too, made one of her free throw shots.

Perkins County went on to score 29 unanswered points in the first quarter. As coach Deanne Bishop said, the girls were “firing on all cylinders.”

Creek Valley scored their first three points of the game before the Lady Plainsmen made a basket in the second quarter. Samantha Patrick sank a field goal with 5:18 on the clock.

Perkins County’s other two points for the quarter came from two free throws by Hannah Kempf.

Creek Valley scored an additional seven points, making the score at half 33-10.

The Lady Plainsmen picked up another 18 points in the third quarter, while holding Creek Valley to just four points.

The score going into the final quarter was 51-14.

The final score was 57-14, giving the Lady Plainsmen their final win of the regular season before heading into sub-districts.

One stat Bishop found notable from Tuesday’s game was the number of steals Perkins County had.

“30 steals shows that the girls were dialed in and hit their defensive rotations,” she said.

Bishop and Potts had the most steals with seven each.

“I’m glad we were able to send our five seniors out on Senior Night on such a good note,” she added.

Potts was the top scorer of the game with 22 points. Huff got seven rebounds throughout the game, the most for the team.

The Lady Plainsmen were set to face Sutherland in the first game of sub-districts Tuesday evening, but due to inclement weather the game has been moved to Wednesday at 7 p.m. CT in Callaway.

If Perkins County beats Sutherland Wednesday, they will face the winner of the South Loup vs. Hi-Line Game Thursday, Feb. 18 at 6:30 p.m. CT.

The winner of that game will move on to districts.