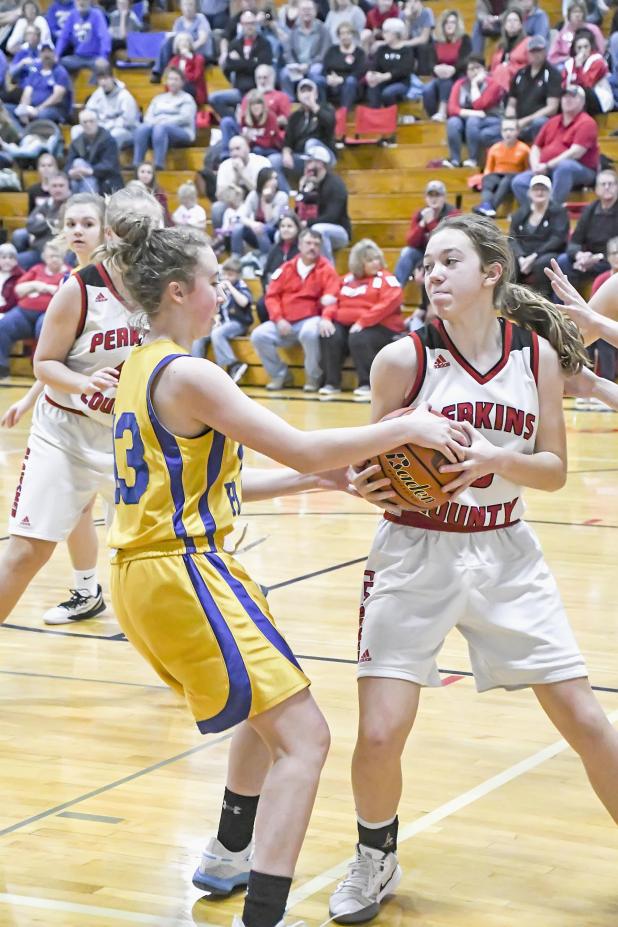 Freshman Meredith Gloy attempts to wrestle the ball away from a South Platte opponent.

Perkins County’s girls basketball team gained a win against Creek Valley on Tuesday, Feb. 11  in the final game of the regular season before heading into sub-districts.

Coach Katie Cross said they were elated to win on Tuesday, and both teams played very well, making it a close game until the fourth quarter.

The Lady Plainsmen started off strong with four field goals and two free-throws in the first quarter for a total of 10 points. Creek Valley fought to match Perkins County’s score but was only able to gain six points.

The Storm picked up their game in the second quarter and bypassed Perkins County by four points. The Lady Plainsmen gained another 10 points in the quarter versus Creek Valley’s 18 points, leaving the game 24-20 at half.

The Lady Plainsmen were not deterred by their loss of the lead, and picked up 12 points for their team in the third quarter. They put the pressure on the Storm and held them to just eight points.

The game was tied 32-32 going into the final quarter. It was anyone’s game. Perkins County again held Creek Valley to single digit scoring in the final quarter of the game, and the Storm’s scored six point.

The Lady Plainsmen, however, played their best quarter of the game and put 20 points on the board, finishing the game 52-38.

Rylee Huff was responsible for the majority of the third quarter points, sinking two treys and two field goals for 10 points. Huff, Hallie Fisher and Dani Burge were all the top scorers against Creek Valley, each scoring 12 points for the Lady Plainsmen.

“Our girls did a fantastic job of keeping their head in the game and not backing dow,” said Cross. “Rylee, Dani, and Hallie did a great job of stepping up to the offensive plate, especially in the 3rd and 4th quarter.” Cross also noted the girls shared the ball well, attacked the basket, and rebounded well on both the offensive and defensive side.

The Lady Plainsmen moved into sub-districts Tuesday evening where they faced Kimball, a team they have played twice this year already. Both past games were losses for Perkins County, but the games were very close in scoring. In the final round of sub-districts on Thursday, Feb. 20, the winner of the Perkins County/Kimball game will take on either Sutherland or South.

“We are looking forward to bringing this momentum with us into our first round of sub districts on Tuesday,” Cross said.