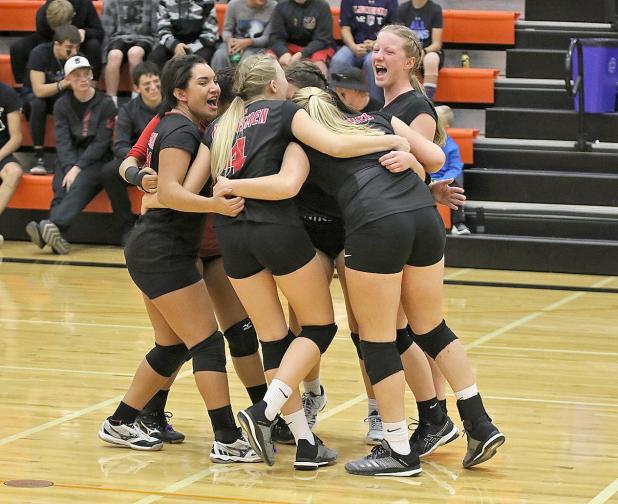 The Lady Plainsmen share their excitement at the results of the match.

Perkins County’s volleyball team knocked off the top-seeded South Platte Knights in the first round of subdistricts Monday night.

That win, along with the three-set win at Kimball, added two more wins to their season record.

The team faced Sutherland Tuesday night in the subdistrict final. Sutherland beat Kimball Monday to advance to the final.

Samantha Patrick led the team in kills against Kimball with six, and Bella Frazier was close behind with five kills. Patrick also had the most aces, leading with seven. Juels Lyon had 13 digs. Riley Huff led assists with 12, and Meghan Bishop had 12 serves received.

Coach Monica Cole remarked the team played well against Kimball, and she hoped they could continue that through subdistricts.

The girls did just that, defeating South Platte in the first round of D1-12 subdistricts, taking three of four games.

They continued in subdistricts on Tuesday against Sutherland. See next week’s paper for results.