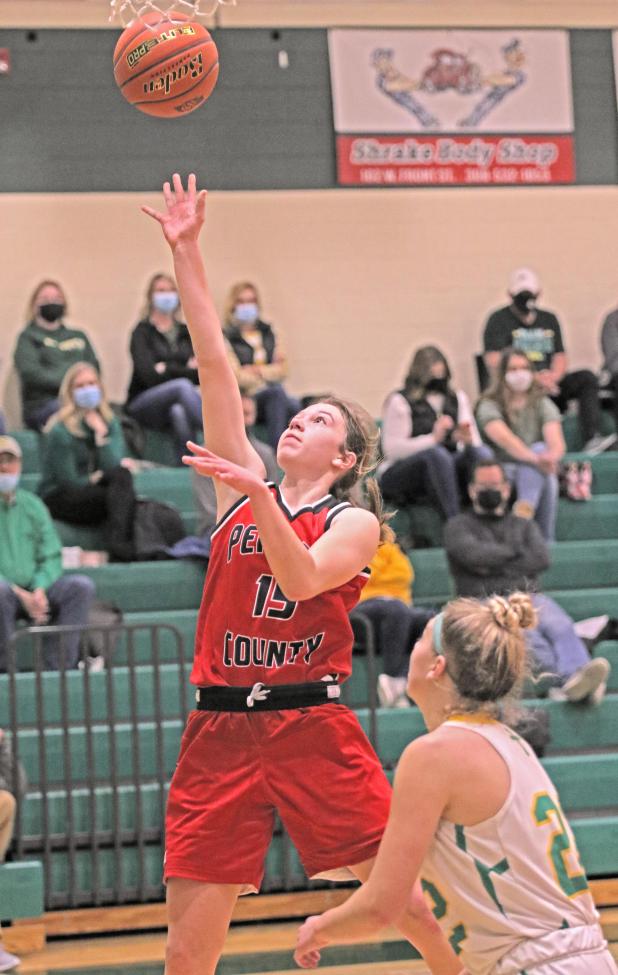 Sophomore Meredith Gloy takes a shot after grabbing the loose basketball from an opponent who had fallen.

Lady Plainsmen lose by 2 in final seconds of NP game

The Perkins County girls basketball team went 1-1 in two very close games over the weekend against North Platte St. Pat’s on Friday and Sutherland on Saturday.

St. Pat’s won the tip and gained first possession of the ball, but after a missed shot, senior Dani Burge grabbed the rebound. The ball changed hands back and forth for around a minute before Burge made the first shot of the game.

The Lady Plainsmen went on to score seven more points in the first quarter, while the Lady Irish picked up 17 points. They started the second quarter 9-17.

In the second quarter, Perkins County gained a small lead on their opponents. The Lady Plainsmen put 15 points on the scoreboard, eight points alone from freshman Kailee Potts. The Lady Irish were held to just four points, making the score 24-21 going into the second half.

Perkins County continued to grow their lead, scoring 22 more points in the third quarter. The Lady Irish picked up their game and scored 18 points, bringing the score to 46-39 heading into the final quarter.

Though the game had been relatively close throughout, the fourth quarter gained intensity, as both teams picked up points until the game was 55-55.

In the final two seconds of the game, St. Pat’s #14, Rachel Heiss, sank a basket from the lane, ending the game 57-55 with North Platte taking the victory.

“To close a 50-point gap is pretty remarkable,” said Coach Deanne Bishop. “Our level of competitiveness was a testament to the girls’ focused efforts in practice and executing our points of emphasis for that particular game plan.”

One factor Bishop says contributed to how well the girls played was the amount of rebounds the team got. The goal was to limit the opposing team to no more than one shot each trip down the court, she added.

Burge obtained 12 rebounds throughout the game.

Potts was the top scorer of the team with 31 points scored, which included four three-point baskets.

Saturday, Jan. 9, the Lady Plainsmen had another away game, this time in Sutherland.

Perkins County won the tip, but after a missed shot, Sutherland caught the rebound.

Sophomore Meredith Gloy scored the first basket of the game, kicking off what would be their second close game of the weekend.

Perkins County scored 11 points to the Lady Sailors’ 10 in the first quarter, making it neck and neck from the beginning.

Perkins County again scored 11 points in the second, while the Lady Sailors scored nine points, making the score 22-19 at half.

Sutherland got more aggressive with their offense in the third quarter, picking up 16 points while holding the Lady Plainsmen to eight, giving Sutherland a five-point lead over Perkins County heading into the final quarter.

The Lady Plainsmen put 15 more points on the scoreboard in the final quarter, while Sutherland scored nine, making the final score 45-44.

Rebounding was again important for the Lady Plainsmen, with Burge and Gloy each catching 11 rebounds.

Bishop said both the St. Pat’s and Sutherland games are exactly what should be seen in high school basketball: teams working hard and competing.

“As a coach, I try to help the girls keep their composure, analyze the various situations we are in and remind them of what they can do to be successful in those moments.

The Lady Plainsmen’s record stands 5-5 coming into this week, with two more games before the Conference Tournament.

Bishop said the girls have a full-slate of upcoming games, with some tough opponents this week and at the Conference Tournament next week.

“I think the girls have proved to themselves that when they play well, they can play with top-tier teams,” she noted. “We look to continue to improve and compete at a high level.”

The first game of the week for the Lady Plainsmen is an away game in Imperial against Chase County on Thursday, Jan. 14. The varsity girls will hit the court at 6 p.m.

Friday, Jan. 15, Perkins County will be hosting Wauneta-Palisade for a home game, which will begin at 5:30 p.m.

The details for the Conference Tournament are still to be determined, but girls games will begin Monday, Jan. 19.