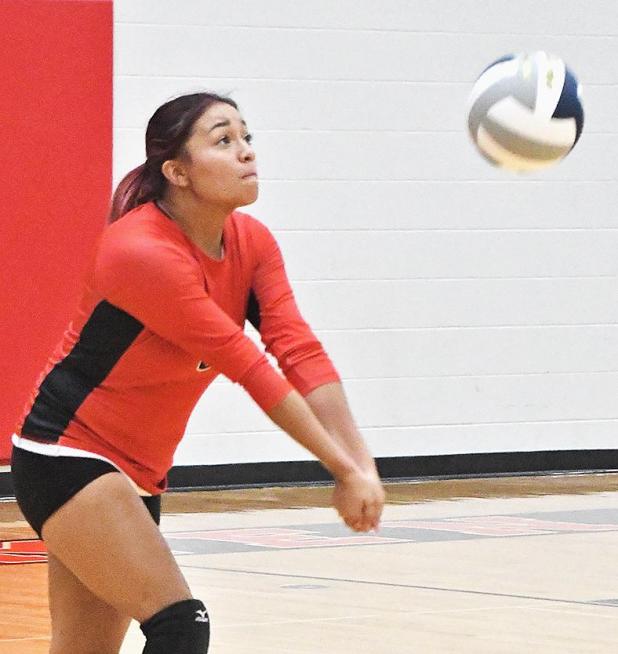 Junior Juels Lyon bumps the ball to set up a play for her teammates. Lyon had a night of good serving, according to coach Monica Cole. 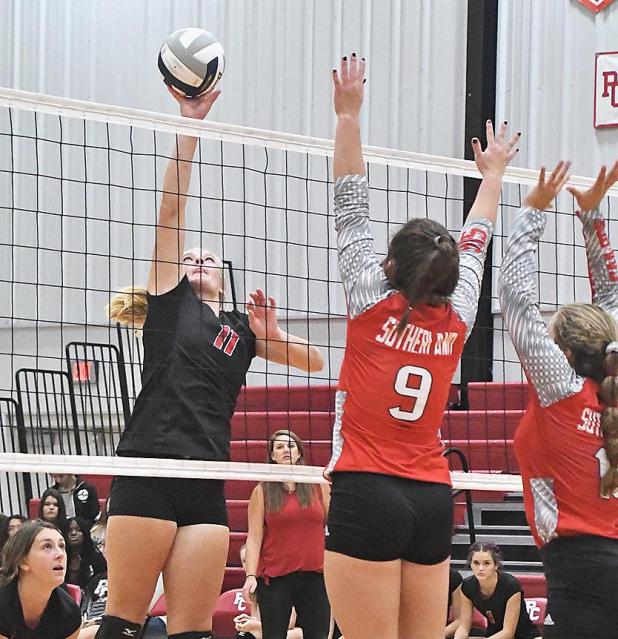 Senior Dani Burge spikes the ball back to the Sailors during their second set of the evening against Sutherland.

Perkins County’s varsity volleyball team picked up two wins at the home triangular against Sutherland and Creek Valley on Thursday, starting their season 2-0.

“It almost just felt right from warm-ups until the games were over,” said coach Monica Cole. “Most of these girls have been playing together for three years now, and I feel like they’re finally getting their trust and their chemistry to fall into place.”

The Lady Plainsmen first faced Sutherland. In the first set, Perkins County scored the first point of the game, and they held onto a strong lead throughout. They defeated Sutherland’s Sailors 25-21.

The second set was consistently a close game, and ultimately the Lady Plainsmen fell to Sutherland, 24-26.

In the third and final set against the Sailors, Perkins County snagged the lead from the beginning and held onto it until the very end. They ended the set 25-21.

After their 2-1 victory against Sutherland, the Lady Plainsmen played Creek Valley. The girls only had to play two sets, because they were victorious in both. Perkins County defeated the Storm 25-22 and 25-18.

At the end of the game, rather than shake hands, both teams stood at their benches and waved as a show of good sportsmanship.

“It’s been a long time since we’ve been 2-0 at the beginning of the season, so right now we’re feeling like we want to continue to win,” Cole said.

The team did well with passing and distributing the ball to a hitter throughout the evening, Cole noted, and they also had an evening of good serves.

Fans attending the game are encouraged to wear masks, but are they are not required. It is also asked that those in attendance social distance when possible.

Last year, the Lady Plainsmen defeated South Platte in the first round of subdistricts. Knowing how well they played Thursday night, Cole hopes they can bring that momentum into Tuesday’s contest at Big Springs.

South Platte currently stands 2-0 after their wins over Creek Valley and Garden County on Saturday, Aug. 29. Brady fell to Pleasanton, their first opponent of the season, leaving them 0-1.

The first game of the evening was between South Platte and Brady. The Lady Plainsmen will play Brady in the second game, and South Platte in the third.