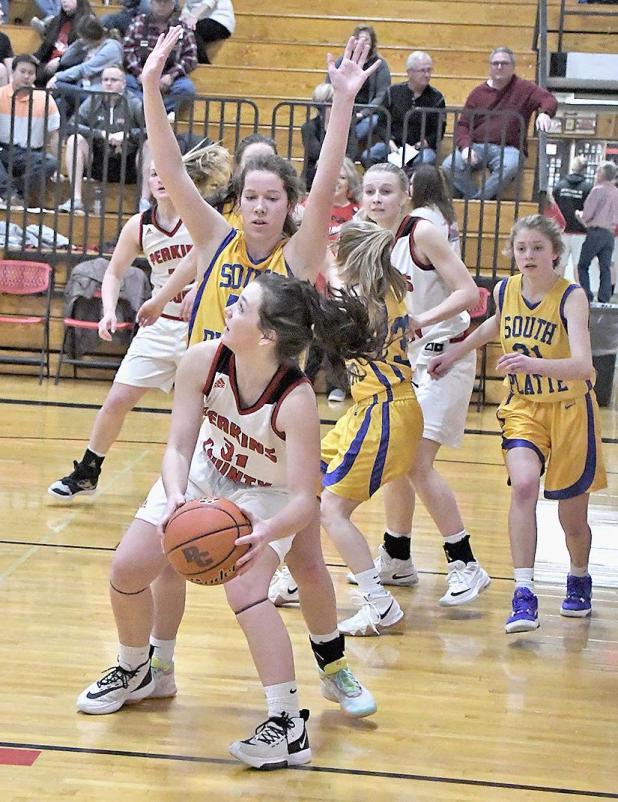 Sophomore Hallie Fisher checks over her shoulder to see if she has a shot at the hoop while her teammates attempt to hold off the defense.

The girls struggled to score and hold on to the ball during both games, which led to their downfall.

The Lady Plainsmen did not get off to a good start against Maxwell’s Wildcats on Tuesday.

Maxwell kicked off the game with 11 points in the first quarter. Perkins County scored just four.

The deficit only continued to grow in the second quarter, where Maxwell gained another 16 points to the Lady Plainsmen’s three leaving the game 27-7 in Maxwell’s favor at the end of the first half.

The Lady Plainsmen, however, added just five points to their score, ending the third 36-12.

Maxwell again struggled to score in the fourth, scoring only six points. Perkins County managed to sink just one basket for two points in the final quarter.

The Wildcats defeated the Lady Plainsmen 14-42.

Things were looking positive at the home game against South Platte in the first quarter.

The Lady Plainsmen started out stronger than they had against Maxwell, putting eight points on the board. South Platte’s Blue Knights scored 18 points.

The Blue Knights were quick and cunning and caught on to Perkins County’s offensive tactics early on in the game, which helped them gain another 15 points in the second quarter.

They held Perkins County to just five points, many of which came from free-throw shots. South Platte remained ahead at the end of the first half, 33-13.

South Platte gained 11 points in the third quarter versus Perkins County’s four, leaving the score 44-16 in the third.

The Lady Plainsmen pushed even harder in the final quarter to catch up to the Blue Knights and prevent them from scoring.

The girls held South Platte to just seven points in the fourth, with Perkins County nearly matching their points with six.

Unable to catch up to South Platte’s score, the Lady Plainsmen suffered a loss, 51-23.

Perkins County’s record coming into the week stands at 4-16.

Stats were unavailable at press time.

The girls will move on to sub-districts where their first game is on Tuesday, Feb. 18 at Ogallala. Other schools in attendance for Class D1-12 are Kimball, South Platte and Sutherland. Sub-districts will continue on Thursday, Feb. 20.