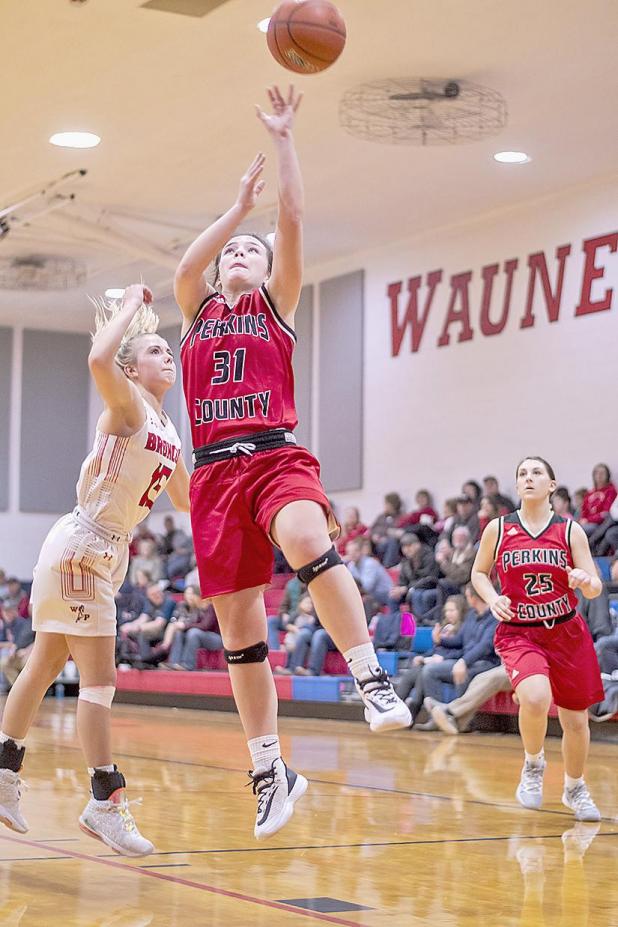 Sophomore Hallie Fisher goes up for a lay up while her teammate, Samantha Patrick prepares to rebound if needed. Fisher was the top scorer in the games against Sutherland and Kimball, scoring eight and 10 points respectively.

The Perkins County girls fell to Chase County last week in their first game of the tournament, but that did not hold them back.

On Friday, Jan. 24, the Lady Plainsmen gained a victory over Sutherland and moved on to play Kimball for fifth place.

Perkins County had defeated both of these teams in the regular season, so things were looking positive for the girls.

However, despite their victory against the Sailors, the Lady Plainsmen fell to Kimball to earn sixth place.

“Overall, we were very pleased with how the girls played in the tournament,” said Coach Katie Cross. “We saw a lot of improvement in our ability to handle pressure and attack the basket, which led to a win against Sutherland.”

Perkins County gained a quick lead over the Sailors in the first quarter, scoring 10 points on their opponents. Sutherland only managed three points in the quarter.

Rylee Huff was responsible for four of Perkins County’s 10 points, sinking a free throw and a trey.

Their lead continued into the second quarter.

Sutherland gained six points in the second quarter to Perkins County’s nine points. This put the score 19-9 at half, Lady Plainsmen up.

Sutherland stepped up in the second half scoring seven points in the third quarter. Perkins County scored five points, closing the gap between the two teams to eight, 24-16.

Both teams displayed their hard work and desire to continue in the tournament, and their scores reflected that effort.

Sutherland and Perkins County each scored 14 points in the final quarter, as the Lady Plainsmen hold on to a 38-30 win.

Over half of Sutherland’s baskets came from behind the arc, which earned the Sailors 18 of their 30 total points. Kellen Copland of Sutherland scored three treys, two of them in the final quarter.

Cross commented it’s is always fun to get a win against Sutherland, and the Lady Plainsmen were very excited to see that success.

Hallie Fisher was the top scorer against the Sailors with eight points.

Perkins County advanced to their final round where they would face Kimball on Saturday, Jan. 25.

The game against Kimball’s Longhorns was close, and the effort from both teams was obvious.

Kimball, on the other hand, kicked off the game on a high note with 12 points. The first quarter ended 12-2, but this did not deter the Lady Plainsmen.

The girls switched to man-to-man defense, which also spurred the offense, scoring 16. The Longhorns fought equally hard, but only added 13 points, making the halftime score 25-18 in their favor.

The Lady Plainsmen slowed down again in the third quarter, scoring just five points with one free throw each from Huff and Fisher, and a three pointer from Autumn Anderson.

It was still anybody’s game at this point.

Kimball again scored just eight points in the final quarter, and Perkins County 13. It was not quite enough to gain the victory, falling 41-36.

Perkins County ended the SPVA tournament in sixth place, ahead of Sutherland.

Cross said the girls worked hard to come back from a 15 point deficit and nearly tied the game in the fourth quarter, Cross said.

Fisher again led the team in scoring with 10 points.

The girls finished out the tournament with a 4-12 record going into their game against Holyoke.

“The girls played very hard in each of the games, but we are especially excited about how they played against Sutherland and the last three quarters of the Kimball game,” noted Cross. “We are excited to see Kimball again in subdistricts and fully believe that the outcome will be entirely different.”

Perkins County traveled to Holyoke on Tuesday, Jan. 28. Holyoke stands 11-1 coming into the week after their last game where they defeated Wray 70-57 on Saturday.

On Thursday, Jan. 30 the Lady Plainsmen will face Sedgwick County’s Cougars in Julesburg. The Cougars stand at 7-4 and most recently faced Otis where they added gained a victory, 39-19. Jayvee action kicks off at 4 p.m.

Then on Tuesday, Feb. 4th, Perkins County will travel to Maxwell. Maxwell’s Wildcats are 9-7 coming into the week, after falling to Dundy County Stratton in a close game on Monday, 38-33.