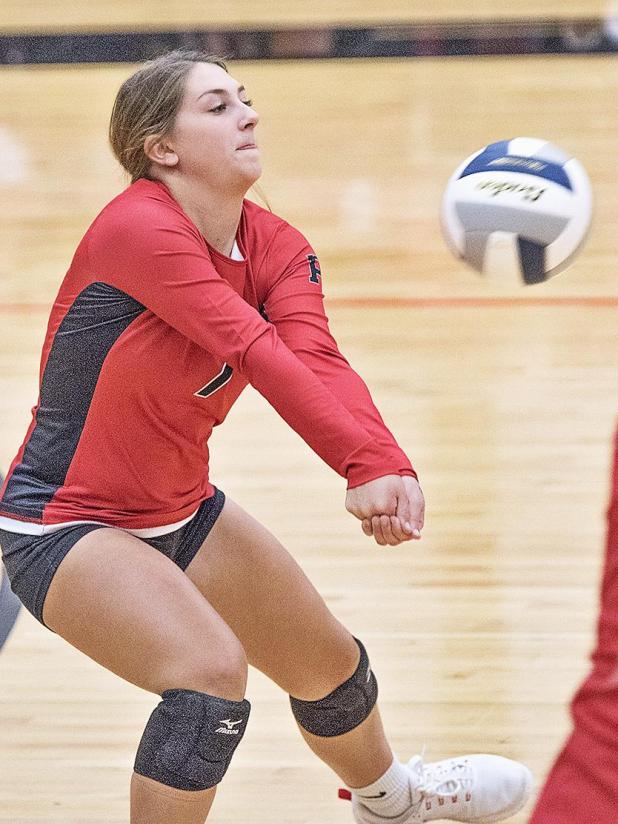 Junior Samantha Patrick sets up for a pass.

Perkins County hosted this year’s SPVA volleyball tournament Saturday, October 17. Six teams were in attendance, due to North Platte St. Pat’s backing out of the event.

The Lady Plainsmen were originally set to face Chase County first in the tournament, but due to St. Pat’s dropping out, they played Sutherland first instead.

“We came out against Sutherland and fought a good battle to get the win,” said coach Monica Cole. “It shouldn’t have been quite as close as it was, but that’s the momentum game of volleyball and it makes it a fun game to watch and coach!”

Perkins County won their first set against the Sailors with a seven-point lead, 25-18. Sutherland came back the second set to win a close match, 27-25. The Lady Plainsmen took the third set 26-24 and headed into the second game of the day.

They next played Bridgeport in two sets, and fell in both, 25-20 and 25-16. Cole said even though they weren’t able to win a set against them, they fought harder and much differently from the last time they played Bridgeport earlier in the season.

In their last game of the day, Perkins County faced Hershey, who was moved to the first seed after St. Pat’s backed out. This was the first time they had played Hershey the entire season.

“We held out own on the serving end of things along with some fantastic hustle plays!” Cole said.

The Lady Plainsmen fell to Hershey in two sets, 25-21 and 25-20, placing Perkins County in fourth place in the SPVA tournament.

The final game of the regular season for the girls was Tuesday, Oct. 20 against Kimball. Cole said the girls were looking forward to the game.