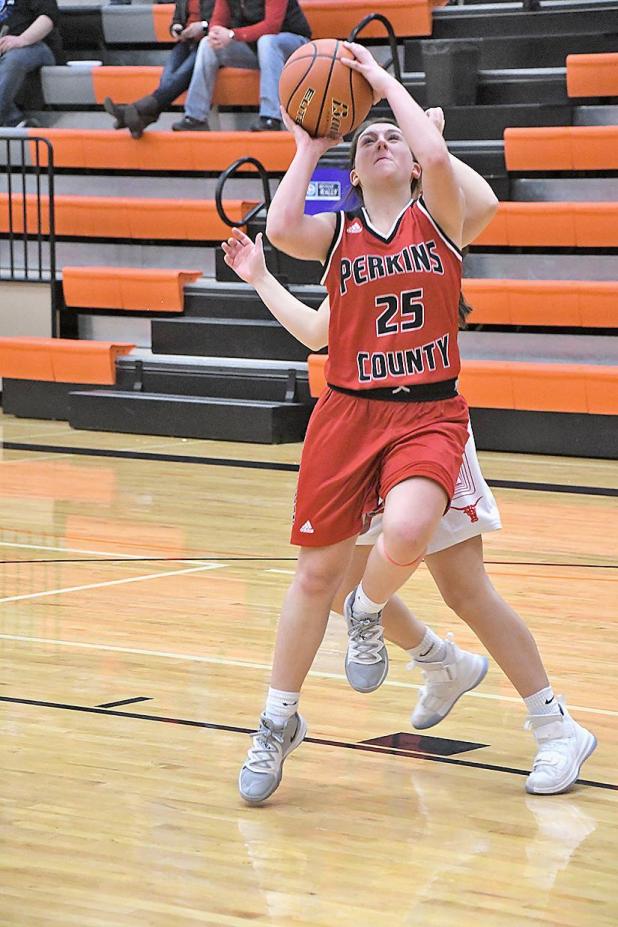 Sophomore Samantha Patrick cuts in front of Longhorn defense to go up for a layup. Patrick was the top scorer at the sub-district game against Kimball with 14 points.

The Lady Plainsmen finished their basketball season at the first game of sub-districts against Kimball Tuesday, Feb. 18.

This was the third time the Lady Plainsmen had faced Kimball over the course of the season, and while each game was close, Perkins County fell each time.

The game got off to a rather slow start for Perkins County, and Kimball’s Longhorns were laying on the pressure from the beginning.

The second quarter was an improvement for the Lady Plainsmen, and between a three-pointer from both Meghan Bishop and Autumn Anderson and five more points from Patrick, the girls picked up 11 points.

The Longhorns scored nine points in the second, leaving the game 21-15 at half in Kimball’s favor.

Perkins County again scored in the single-digits in the third quarter, with just seven points. Kimball put 13 points on the scoreboard, leaving the game 34-22 going into the final quarter.

It was still anybody’s game, despite the 12 point deficit.

The Lady Plainsmen fought till the end and scored 9 more points in the final quarter. The Longhorns countered with 12 points, winning the game 46-31.

Patrick was the top scorer of the game with 14 points against the Longhorns.

The Lady Plainsmen finished their season with a 5-17 record.

Kimball went on to play South Platte in the next round of sub-districts. South Platte was victorious and will move on to the district finals on Friday, Feb. 28.