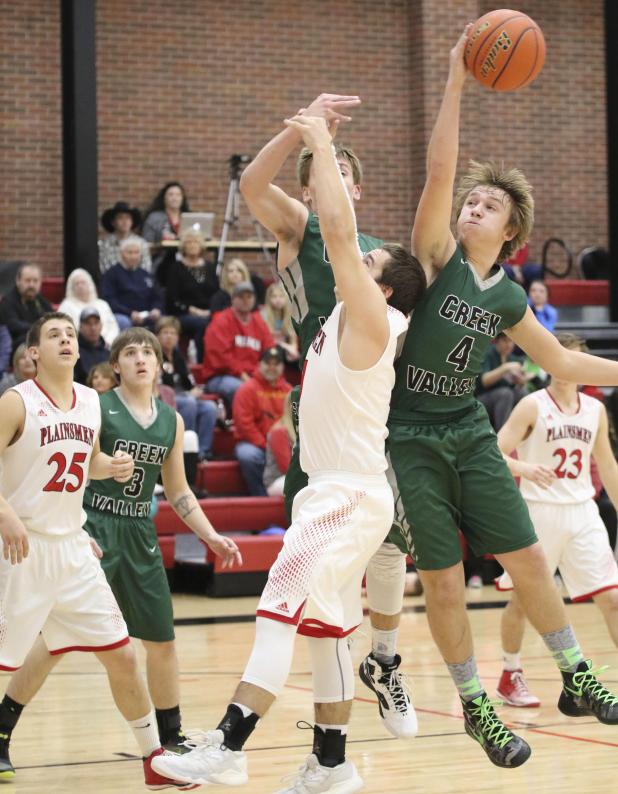 Plainsmen senior Tyler Thelander looks to recover the ball after it was stuffed by Creek Valley’s #4 Pierce Leef on Tuesday, Feb. 7.

PC Plainsmen take down the Storm

Perkins County saw their Plainsmen boys host Creek Valley on Feb. 7 where the boys were able to pull out a victory over the Storm, taking their record to 11-10.

Spencer Ross drew a foul and put up the first two points of the game from the free-throw line. Charles Johnson took the ball to the net for PC, and Michael Beck followed by nailing a triple before Creek Valley could get in their first basket.

Johnson put up the next six points for PC, who’s defense saw just one free-point go up for CV, finishing up the first period ahead of the Storm 13-3.

After that, the points kept coming for Perkins County into the second when a free throw by Tyson Patrick, a trey and a free-throw from Ross, two baskets from Bailey Schrotberger, two more in the bucket from Johnson, and a basket by Josh Johnston added up to a 21-point run for the Perkins County Plainsmen.

It was a foul and a good free throw that broke the streak for Creek Valley, giving them their only point of the second period. At half time, PC was ahead 30-4.