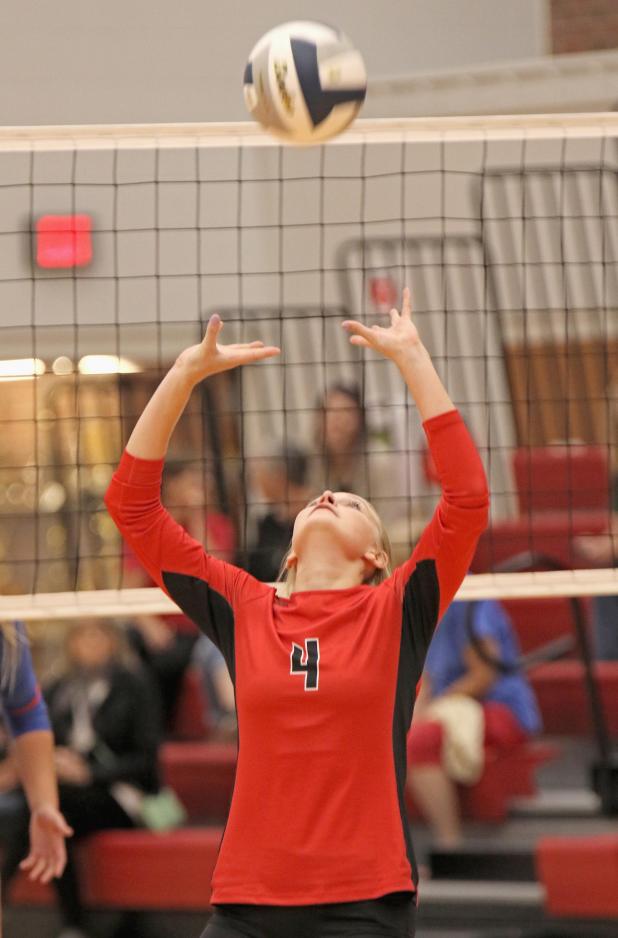 Senior Rylee Huff gets ready to set the ball during the home game against the Arthur County Wolves Monday.

PC Volleyball serves up a week of wins

The Lady Plainsmen faced three volleyball teams over the last week and was victorious over each of them.

The girls first traveled to Wallace for a triangular against Wallace and Hitchcock County on Tuesday, Sept. 8.

They faced Hitchcock County first and came out strong with a 25-20 win in the first set. The Falcons then won a close game 26-24, which Perkins County returned in the final set to win 2-1.

The Lady Plainsmen again started strong, this time defeating Wallace 25-13 in the first set. Wallace’s Wildcats stepped up and won the second set 25-18. Perkins County came back to win the third set 25-13, giving them another 2-1 victory for the evening.

This successful night of games made Perkins County’s record 5-2.

Monday, Sept. 14, the Lady Plainsmen played against Arthur County in a home game, the first of six games for the girls this week.

Coach Monica Cole said at the beginning of the first set, the girls weren’t syncing all that well.

“I told them that we just needed to settle in and play ball,” Cole said. The girls listened and picked up their game midway through the first set.

Sometimes the adrenaline flow, alone with the nerves, are hard to overcome right away, she said, but once they settle in and just react they do well.

Cole also commended the Lady Plainsmen for their ability to make adjustments throughout the game on defense.

“I can see the wisdom of the game on the court this year!” she said. “Seeing the girls continuously persevere and battle for a win is so much fun!”