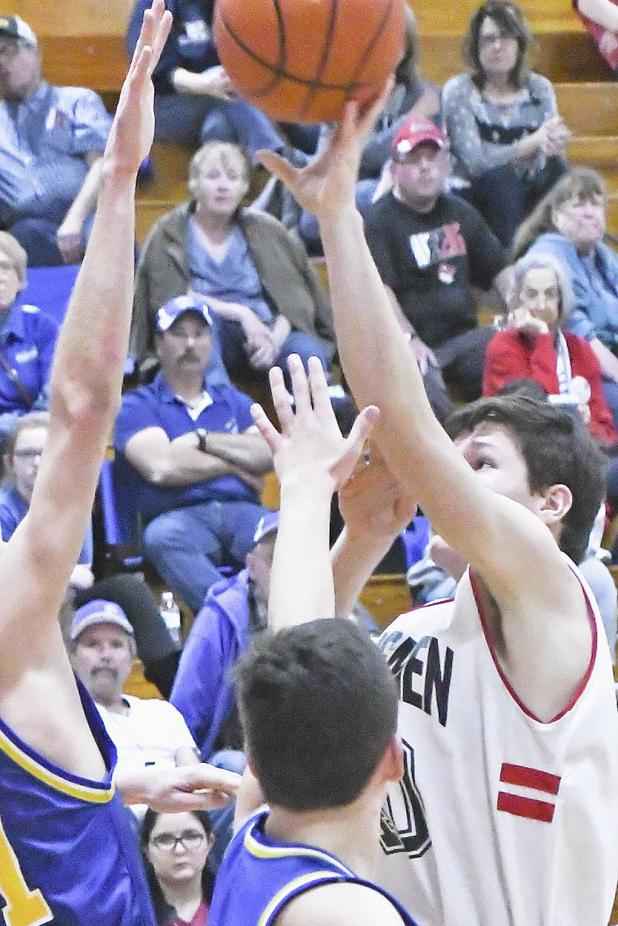 Despite a 53-65 loss to the Bridgeport Bulldogs Friday, it was more about the way the Plainsmen played.

The Plainsmen were coming off a three-game win streak but none of those teams were the caliber of Bridgeport.

Cole wanted the type of game from his kids that would build momentum going into this week’s subdistricts. He got it.

The Plainsmen held a 7-0 lead before Bridgeport got on the board. They were within one, 16-15, when the Bulldogs hit a shot at the buzzer for an 18-15 lead after the first eight minutes.

After a scoring drought by both teams of nearly three minutes, Carson Thelander hit a deuce and Hunter Garner dropped a 3-pointer. That regained a 19-18 lead for the Plainsmen at the 5:18 mark.

Bridgeport hit a pair of treys to regain a lead that tallied no more than four points.

At the second quarter buzzer, Bridgeport hit another trey for a 31-24 halftime lead.

In the third, the Plainsmen kept the Bulldogs in sight, trailing no more than five points.

Garner scored eight straight along with four from his brother James to keep the game tight.

Bridgeport hit a trey in the final minute but it was the Plainsmen who hit a shot at the buzzer this time.

Alex Poppe drained a trey from outside the key to keep the Plainsmen within five, 42-47.

Cole said his guys simply ran out of gas in the fourth quarter. Cole was playing a six-man lineup while Bridgeport was rotating 11 different players in.

Over a three-minute period, the Bulldogs outscored the Plainsmen 13-4 to put the game away.

Hite his a half-court plus shot at the buzzer to make the ifnal score 53-65.

Cole’s goal is to have at least three players in double figures. Friday there were only two. Another 10 points would have made a big difference.

Garner paced the team with 17, followed by Hayden Foster, who scored all 14 of his points in the first half.

The winner of that game will play Thursday at 6 p.m. MT at the McCook High School. They will face the winner of the Hitchcock County-Sutherland game.