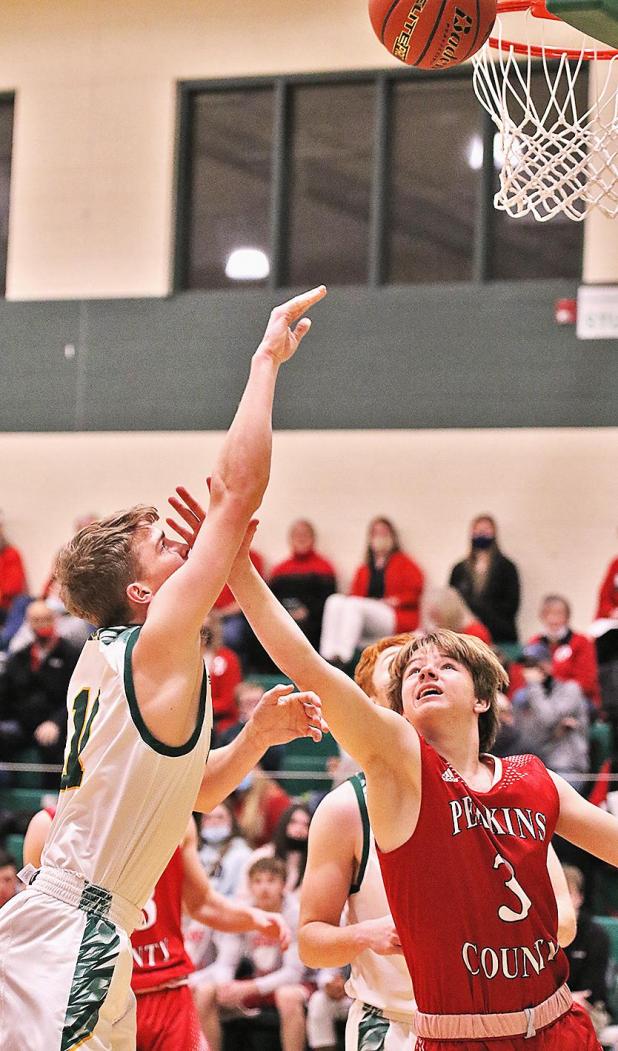 Junior Jeb Kohl makes it difficult for the Irish’s Logan O’Malley to get a good look at the basket during a St. Pat’s fast break early in the game. The Plainsmen’s press and defense kept the Irish off balance during the first 10-12 minutes.

For a quarter and a half, the Perkins County Plainsmen put together some of their best basketball of the season thus far, Coach Shawn Cole said this week.

While the St. Pat’s Irish went on to a 76-41 win on their home court Friday, what stood out for Cole and his team was how they played those first 10-12 minutes.

After falling behind 4-0 early, the Plainsmen went on a 13-3 run, including three treys from Triston Hite, and held a 13-12 lead after the first eight minutes.

Cole said he was pleased with his team’s effort during that stretch.

St. Pat’s started pushing the ball hard in the second quarter, building a 15-point lead before the Plainsmen chopped it back to 11 before going in at half down 36-22.

The Plainsmen’s shooting success was indicative of their scoring.

They picked it up again in the third going 46% but couldn’t get balls to drop in the fourth, going just 1 for 16.

Hite was the only Plainsman to finish in double figures with 15.

The fortunes turned around Saturday night at Sutherland, shooting 46% from the field en route to a 30-point win over the Sailors, 65-35.

Hite lit it up it again from outside the arc in the first quarter, dropping four bombs, scoring 14 of the team’s 25 points.

The Sailors struggled with the Plainsmen’s press and their defensive pressure. At the other end of the court, the Plainsmen were pretty much having their way, building a 23-2 lead late in the first, holding the Sailors to just four points in the opening frame.

By halftime, the Plainsmen built a 39-14 lead and never looked back.

They added seven more to their lead in the third, finishing with a 30-point victory.

Hite lead the scoring with 21, followed by Hunter Garner with 14.

The 4-6 Plainsmen will travel to Imperial to face 6-5 Chase County Thursday and will return home Friday to host 3-9 Wauneta-Palisade.

The SPVA conference tournament will begin next week.

First round games will be hosted by the higher seed on Monday, Jan. 18.

Pairings for the tournaments were not released until Wednesday. These can be found on the Tribune website.