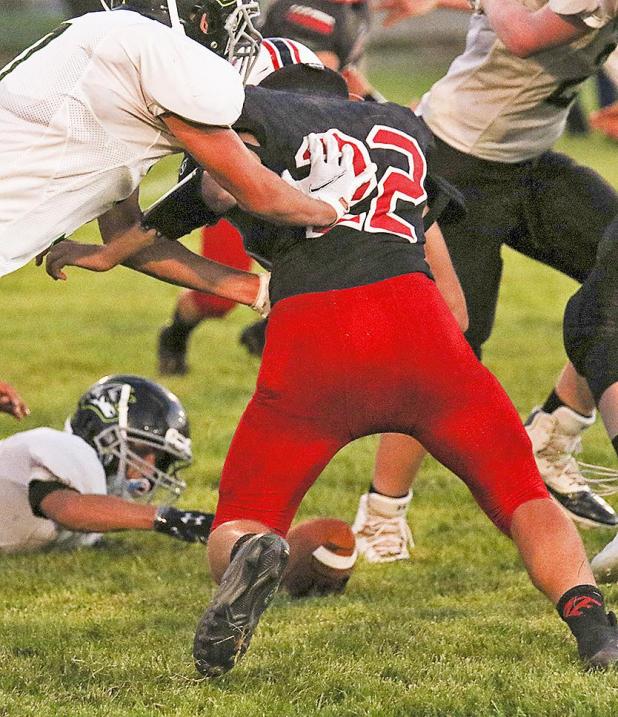 Erik Snyder dropped on this loose ball to set up the Plainsmen’s final score of the first half—a pass from Triston Hite to Hunter Gardner.

For the second week in a row, the Plainsmen fell behind early.

For the second week in a row, they came roaring back to claim a convincing homecoming win to open the season 2-0.

This week, it was Maywood/Hayes Center who pulled ahead with an 18-16 lead early in the second quarter.

The Plainsmen then answered in a big way, rolling off 40 unanswered points during the rest of the quarter to lead 56-18 at half.

Coach Tanner Collins remains a little baffled why his team can’t come out strong from the opening kickoff.

For some reason that he’s yet to understand, it’s been hard for the kids to “go all out” at the beginning of a game.

He said that’s not something they can’t get away with this week when they face Dundy County Stratton.

Despite their 56-18 lead at half on Friday, Collins said they still made plenty of mistakes in the first half that need fixed going into a big game with DCS.

He said the defense needs to be more physical and concentrate on their respective assignments and not give up big plays.

What’s awesome, Collins said, is that “the kids know they can do better.”

Despite the early deficit, the Plainsmen “got the script flipped pretty quickly,” Collins added.

They put the first points on the board with a 35-yard scoring strike from quarterback Triston Hite to receiver Hunter Garner. A two-point conversion put them up 8-0.

Collins said they changed up some plays for their two-point conversions this week. After missing five against Maxwell, they made all but two this week.

The Plainsmen traded scores before M/HC completed touchdown receptions of 18 and 25 yards for their 18-16 lead.

Collins didn’t expect them to throw as much as they did, based on their week one film.

After some adjustments, the Plainsmen picked off a pair of passes, returning each for a touchdown.

Hite and Garner connected on two more scoring strikes of 25 and 14 yards and Erik Snyder carried one in from two yards out to build the Plainsmen’s first-half lead.