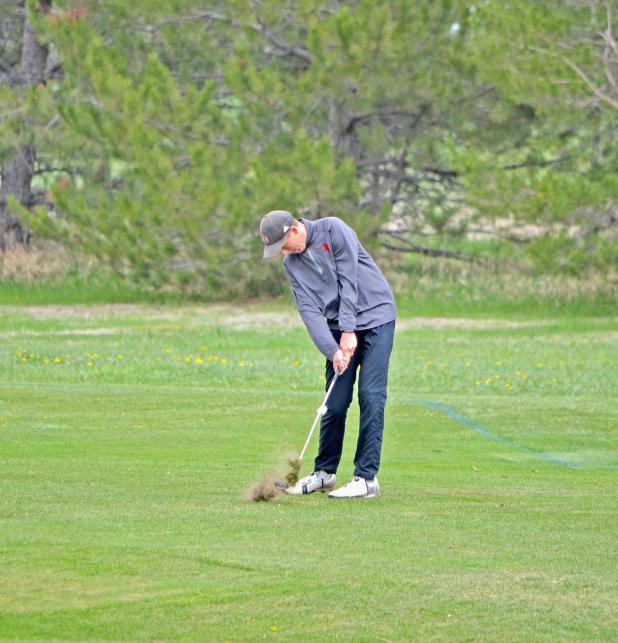 Jacob Woodmancy shoots an approach on hole No. 14 at Kimball. Woodmancy shot an 80 for the day, enough to earn him fourth place individually.

Plainsmen golfers have one regular invite left in season

With a couple more meets under their belts following the Creek Valley and Kimball Invites, the Plainsmen golfers have just one more competition standing between them and districts next week.

On Friday, the PC team traveled to Creek Valley and Monday saw the boys in Kimball.

Senior Aaron Fay took third place as an individual at the Creek Valley Invite on Friday, May 3, and was the only Plainsman to make the top 10 list.

Fay shot an 81, just two strokes behind the first place individual who finished with a 79.

Perkins County placed ninth as a team, out of the 12 competitors that day, with a final day score of 559.

Other team members included Matthew Aerni who shot a 112, Keegan Sims who finished at 178, and a 188 from Blake Dolezal.

Coach Troy Kemling said, “Coach Collins took the team today, made up primarily of our JV team. Aaron joined them on senior skip day as he had all responsibilities made up at school. It paid off for him as he carded the third lowest score of the day.”

“After a wet, cold start to the meet, the Plainsmen golfers warmed up and played solid enough for a second place finish. Aaron led the way, earning medalist honors by taking advantage of the par 5 holes.  With his length and accuracy on the second shot, Aaron had eagle putts on three of the par 5s today. Converting these to birdies propelled him to the top finish,” Coach Kemling said.

Fay took the number one spot on the individual side of the competition after finishing with a 77 (37-40).

Jacob also played solid golf where his score could have been a few strokes lower if several near-miss putts would have fallen. There was a point in the round where he was visibly frustrated but, to his credit, was able to refocus and restart. By being steadfast in his approach and swing he was able to finish strong,” Kemling said.

The Plainsmen team took second place with a day total of 347, falling behind first place Kimball by 27 strokes.

Kemling said, “I thought the first-year players did well for their first experience on the Kimball course.  The tree-lined fairways and difficult reading greens make it tough for newer golfers.  It was a learning experience for all us today - a step toward getting better.”

Other PC team members were Junior Carson Thelander who finished with a 92, Kaden Smith with a 98, and Deitrik Brueggeman and Aerni both ended the day with a 121.

The final regular invite of the year will be on May 9 in Ogallala at 9 a.m.

Districts are scheduled the following week. Stay tuned to the Tribune for more Plainsmen golf coverage.