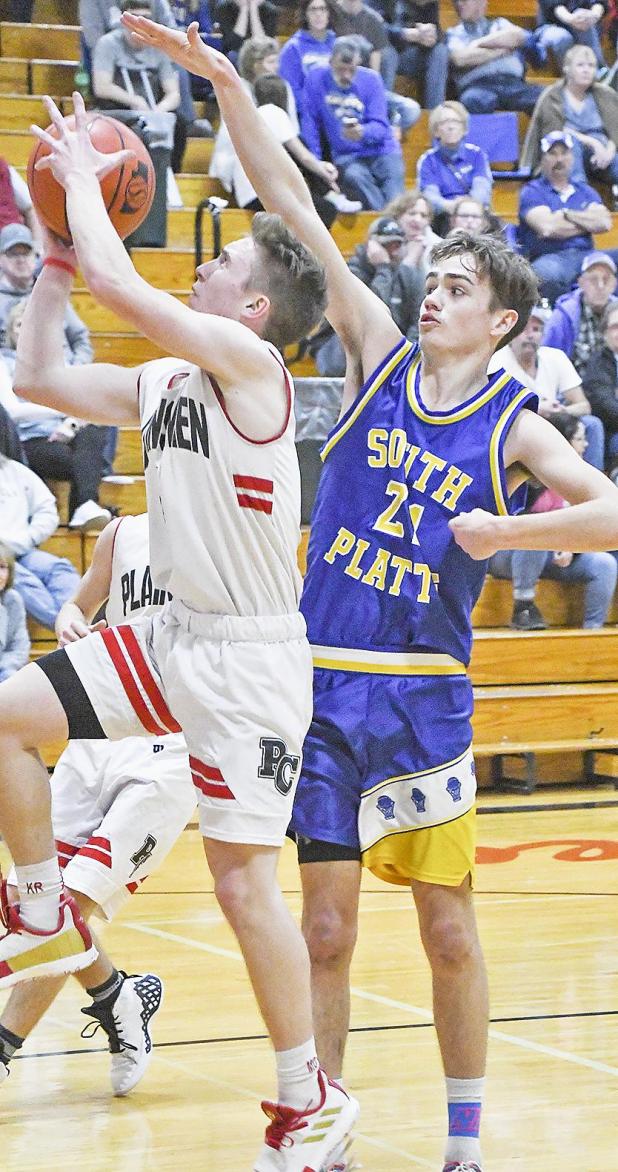 Triston Hite slides by a South Platte defender to get to the basket during action Saturday. Hite led the team in scoring with 21.

Plainsmen knock down a pair of wins

Perkins County’s boys basketball team got just the boost they needed as they head into the final two weeks of the regular season.

That boost came in the form of back-to-back wins last week.

The first of the two wins came last Tuesday at Maxwell, with the Plainsmen downing the Tigers 53-45.

They returned home Saturday to finish off their home schedule with a 53-28 win over the South Platte Knights.

“We really needed that,” Coach Shawn Cole said this week.

The Plainsmen have just two games remaining on the regular season schedule.

On Tuesday, they traveled to Chappell to face the 3-14 Creek Valley Storm, followed Friday, Feb. 21 with a trip to Bridgeport.

Cole said it was their defensive effort that got the offense going.

The Garner brothers got the offense on track, scoring the first 11 points between sophomore Hunter Garner with a pair of dueces and a trey while senior James dropped in two baskets.

Triston Hite hit a 3-pointer and a 2-pointer with Hayden Foster adding a pair before Hunter Garner hit a trey for a 21-11 lead.

However, the intensity dropped off in the second quarter and Maxwell answered back.

They shifted the momentum with a 20-point quarter of their own to take a 31-27 lead into halftime.

The Plainsmen came back to tie the game 40-40 going into the final eight minutes.

They turned what was a close game into one they would control the rest of the way by scoring the first eight points of the fourth quarter.

Nine of their 13 points came from the free throw line, including a 6-for-6 effort from Hite.

At the other end of the court, the defense held Maxwell to just five points en route to the 53-45 win.

Saturday’s games with South Platte had a throw-back theme with all of the games being played in the Pritchett gym. The boys played in throwback uniforms as well.

Coach Cole sent them out right, starting all four of them.

After another slow start, the seniors, joined by Hunter Garner, turned an early 0-6 deficit into a 10-10 game by the end of the first quarter.

Hayden Foster came in to spark play underneath, getting six of those 10 points,

In addition to playing tough defense, the Plainsmen showed Cole something he hasn’t see a lot this season—other players stepping up to score.

The Plainsmen have leaned pretty hard on Hunter Garner for scoring, whose leading the team with 14.2 per game average.

Saturday, he finished with just two points while Hite and Foster teamed up to score 39 of the team’s 53 points.

Defensively, the Plainsmen limited the Knights to single-digit scoring in the middle two quarters with five points in the second and three in the third.

Hite led all scorers with 21, followed by Hayden Foster with 18.

The two wins improve the Plainsmen’s record to 5-14.