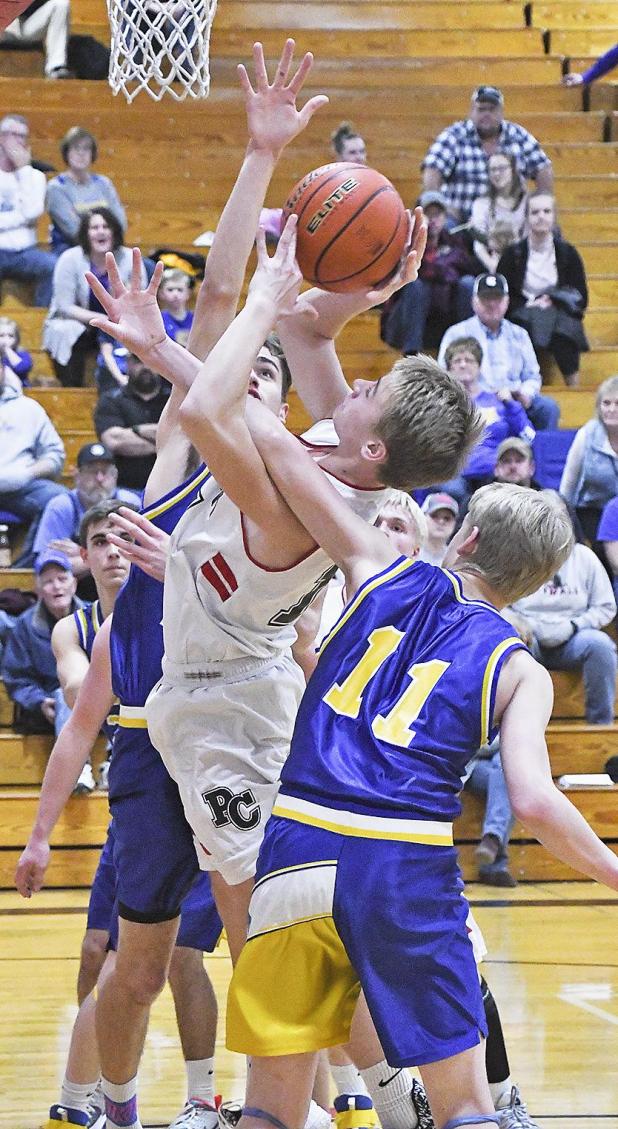 Plainsmen make it three in a row

Russ Pankonin
granttribune@gpcom.net
Hayden Foster has made his presence known under the basket this season. Friday at Creek Valley he finished with 14. Here, against South Platte, he uses his position to get to the line after being fouled.

That improves the Plainsmen’s record to 6-14 after wins over Maxwell and South Platte.

Coach Shawn Cole said stringing three wins together is huge at this point in the season. It’s a good confidence booster, he added, as they travel to Bridgeport Friday to face the 18-4 Bulldogs.

Then, next Tuesday, subdistrict play begins in McCook.

In what has unfortunately become somewhat of a pattern, the Plainsmen found themselves down early again, trailing 9-2 with half the quarter gone.

Cole said when his team plays aggressive defense, and hits the boards hard and gets steals, their offense gets better.

For some reason, playing good defense makes a huge impact on offense for this group of kids.

The defense shifted gears from there, shut down Creek Valley, allowing just one more bucket in the quarter.

With the defense spurring on the offense, Cole’s crew put together a 11-2 run with four different players getting on the board to take a 13-11 lead after one quarter of play.

From there on, the offense put up double figures each of the next three quarters and never trailed the rest of the way.

Triston Hite started feeling it outside the 3-point line, opening the second quarter with a 3-ball. Hunter Garner added another 3-ball for the Plainsmen’s second bucket.

Hite added one more basket with a short jumper in the paint off an assist by Alex Poppe for a 30-17 lead.

Creek Valley rallied for seven before half to stay within 10, 34-24, as the Plainsmen put up 21 in the second quarter.

Nine points would prove to be the closest Creek Valley would come, after hitting a trey ball at the 5:00 mark to make the score 38-29.

From there on, the Plainsmen owned the game, going on a 14-0 run to finish off an 18-point third quarter.

The Plainsmen put another 11 points on the board in the fourth, while holding Creek Valley to single digits with nine.

Three players finished in double figures with Hite leading the way with 18, Garner with 17 and Hayden Foster with 14.

Jayvee action at Bridgeport begins at 4 p.m. with only two quarters to be played.