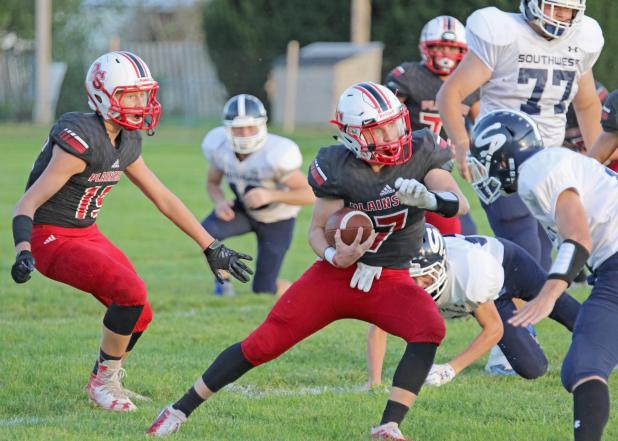 Plainsmen move to 1-1 with win over Southwest

Perkins County’s football team got that all-important first win under their belt in their home opener against Southwest High School Friday night.

The Plainsmen put a pair of touchdowns on the board in the first quarter and added another in the second to take a 20-0 halftime lead.

Southwest came back after half with a pair of scores to narrow the margin to a one-score game.

Several key defensive stops by the Plainsmen late in the game gave them their first win of the season.

Coach Jonathan Hunt said they played well in the first half but struggled after halftime.

“Southwest came out and outworked us after halftime,” he said.

Hunt said his squad is young and didn’t maintain their focus and intensity, allowing Southwest to get back into the game.

To get challenged down the stretch and rise back to meet that challenge was a key learning experience for his team.

Getting that win was “huge,” Hunt said. This was their first win since beating Southwest a year ago.

Hunt said the Plainsmen are a better team this year and a win helps them to see their work offseason is paying off.

After the opening kickoff, it took the Plainsmen just seven plays to get on the board.

They started at their own 35 and capped off the drive with an eight-yard touchdown run by Bryder Hickey.

The Plainsmen pushed Southwest inside their own 10, forcing them to punt out of their own end zone.

But in a bizarre play, Southwest got a new set of downs on their own 8.

The punter bobbled the snap but managed to get off a punt that barely crossed Southwest’s 5 yard line. A Plainsmen tried to field the punt but fumbled. Southwest recovered and got a new set of downs due to the fumble.

It didn’t matter as the Plainsmen held them on downs and took over at the Southwest 30.

After trading possessions twice, the Plainsmen found themselves on their own 8 after penalties and a bad snap.

That’s when Hite went back to pass and saw a seam open up in the Southwest defense.

He split the line and raced down the sideline for a 72-yard touchdown run.

In the third quarter, the Plainsmen fumbled the ball away twice in their own territory.

The first one came at the PC 23. Seven plays later, they scored on a 13-yard run. They added the conversion to make it a 20-8 game.

Five plays later, they scored again. Coupled with another successful PAT run, they pulled to within four, 20-16.

The Plainsmen were forced to punt to open the fourth quarter and Southwest threatened again.

On a fourth-and-two at the PC 25, Erik Snyder sliced through the line and dropped the quarterback for a loss to end the threat.

Perkins County moved the ball inside the Southwest 30 before penalties killed the drive and forced a punt.

Southwest drove from their own 15 to the PC 25 before a bad snap, recovered by them, put the ball back near midfield.

Southwest failed to convert the fourth down to seal the win for the Plainsmen.

The Plainsmen will travel to Trenton Friday to face the Hitchcock County Falcons.

Hunt said he feels the Plainsmen’s scheme matches up well against the Falcons.

Like the Plainsmen, they bring in a 1-1 record with a 20-30 loss to Wauneta-Palisade  in week one and a 46-0 win Friday over Atwood-Rawlins County, Kansas.