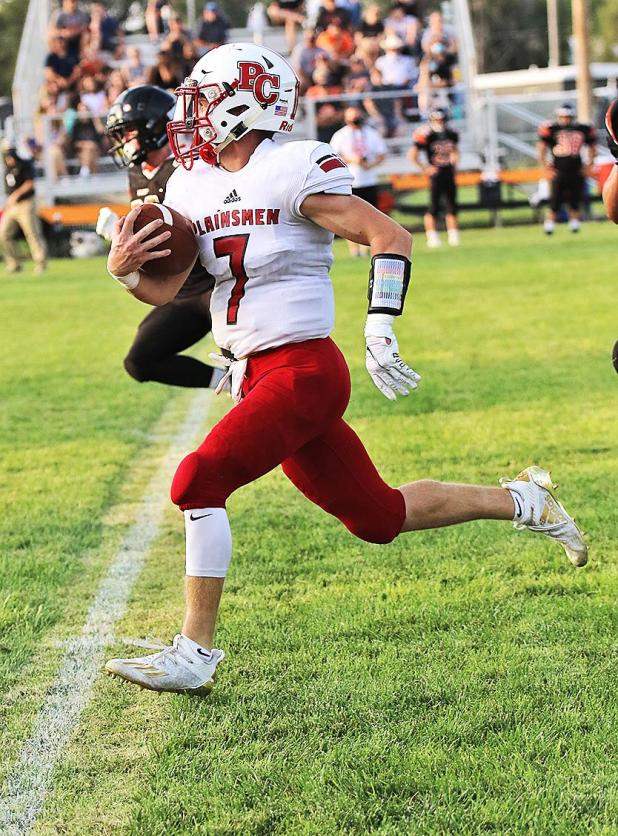 Triston Hite gets loose for a big gain in first half action at Maxwell. Hite threw for 216 yards and four touchdowns, ran for 78 yards and three touchdowns and added nine tackles on defense.

“It was a very good way to open the season.”

The Plainsmen had to overcome some of their own mistakes that allowed Maxwell to go up 14-0 early.

Despite the deficit and giving up some big plays, Collins said he knew his team could correct those mistakes and play themselves back into the game.

He said they had trouble protecting the cut-back lane, which resulted in touchdown runs by Maxwell of 20, 60 and 48 yards.

The Tigers’ last touchdown of the half came after several missed tackles, allowing their back to break away for a 58-yard score and a 28-14 lead.

Before half, the Plainsmen played themselves right back into the game.

A 28-yard scramble by quarterback Triston Hite, coupled with a late hit, set up PC for their third touchdown of the half to pull within eight, 20-28.

A defensive stand at their own 25 gave the Plainsmen the ball back right before half.

Aided by a 40-yard run, the Plainsmen moved into the redzone and Hite scored from four yards out to pull within two, 26-28.

However, Maxwell scored on the final play of the half on a quarterback scramble to widen their lead, 26-34.

To open the second half,

The Plainsmen scored on their first three possessions.

The defense squelched a Tiger drive midway in the third with an interception at the 10.

On the next play, Hite found Hunter Garner in stride behind the Tiger defense, resulting in a 70-yard score and a 46-34 lead.

Maxwell answered with a four-play drive that would prove to be their final score of the night to pull within six, 46-40.

Taking over on their own 38 after failed onside kick by the Tigers, the Plainsmen put together a nine-play drive to go back up 52-40 late in the third quarter.

The defense turned back a 4th-and-5 conversion attempt by the Tigers at their own 30. to set up their final score.

This week the Plainsmen return home for a homecoming matchup with Hayes Center/Maywood.

Since they played on Thurs-day, Collins said players and assistants went to Hayes Center Friday to watch their game.

Collins said they were short three players last week due to coronavirus but will get one, possibly two, back before this week’s game.

He said they came through the game without any injuries and showed they were in good conditioning coming off preseason preparations.

Kickoff Friday is set for 6 p.m. on Haenfler Field.