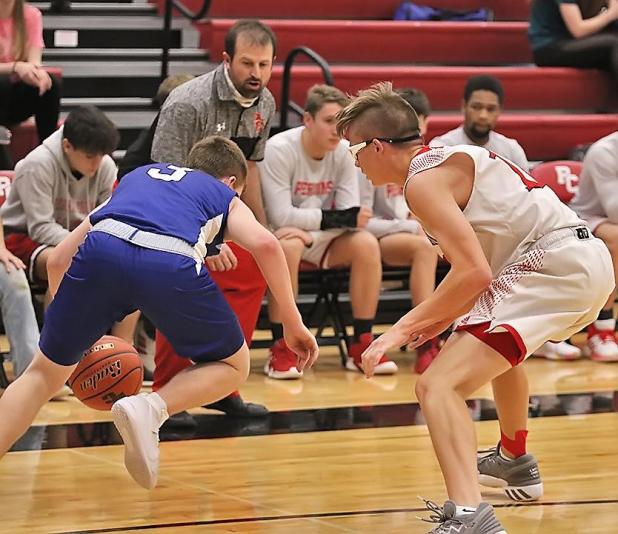 Plainsmen second in own holiday tourney

Shawn Cole’s boys basketball team went 1-1 in their own holiday tournament before the Christmas break, taking second after falling to Wallace in the finals.

The Plainsmen resumed regular season action Saturday, playing host to the Ogallala Indians. After a competitive first half, the Plainsmen fell to Ogallala 68-38.

That brings the Plainsmen’s season mark to 3-5.

The Plainsmen opened the tournament Monday. Dec. 21 with an afternoon game against Hyannis.

In the first quarter, Hayden Foster put in 13 and Hunter Garner added another 10, including a pair of treys, to give the Plainsmen a 23-11 advantage.

Cole said his team executed their press really well, building an 18-point lead by half.

They finished with a 33-point margin, 68-31, to advance to the championship game against and undefeated Wallace squad.

Foster and Garner each finished the game with 20 points.

Going into Hyannis game, Cole said he was concerned  his team could suffer a letdown, after losing a hard-fought game to Dundy County Stratton three days earlier.

The letdown didn’t show up until Tuesday when the Plainsmen faced Wallace in the championship game.

Wallace handled the Plainsmen’s press without a lot of trouble and went with a triangle-and-two defense to shut down the Plainsmen offensively.

As a result, Wallace opened up an 18-6 lead after the first eight minutes.

Wallace put man-to-man pressure on Garner and point guard Triston Hite which ultimately took the Plainsmen out of their rhythm.

The Plainsmen held the  Wildcats to just four in the second quarter to pull within 10. However, the Wildcats’ Camden McConnell hit a 30-footer at the buzzer to regain the momentum and boost their lead back to 13.

The Plainsmen executed their defense and press much better in the second half, Cole noted.

It got them to within nine with three minutes left. However, they were forced to foul and Wallace iced the game at the free throw line. There  they hit 10 free throws down the stretch to claim the championship.

Cole said their lack of scroing was evident, especially behind the arc where they went 2-20. They were only 50% in the paint. For the night they finished at 30%.

Foster led the scoring with 15, followed by Garner with 10.

Cole said this served as a wake-up call that they can’t rely just rely on one or two players for their scoring.

Shooting woes hurt the Plainsmen again Saturday when they played host to another undefeated team in Ogallala.

The Plainsmen hung with the high-scoring Indians for two quarters.

The third quarter sealed the Plainsmen’s fate, getting outscored 20-10.

In the fourth, Cole put his younger players in the game for some varsity experience.

Foster and Hite shared scoring honors with 10 each.

The Plainsmen hit the road this weekend, playing North Platte St. Pat’s on Friday and  Sutherland on Saturday.