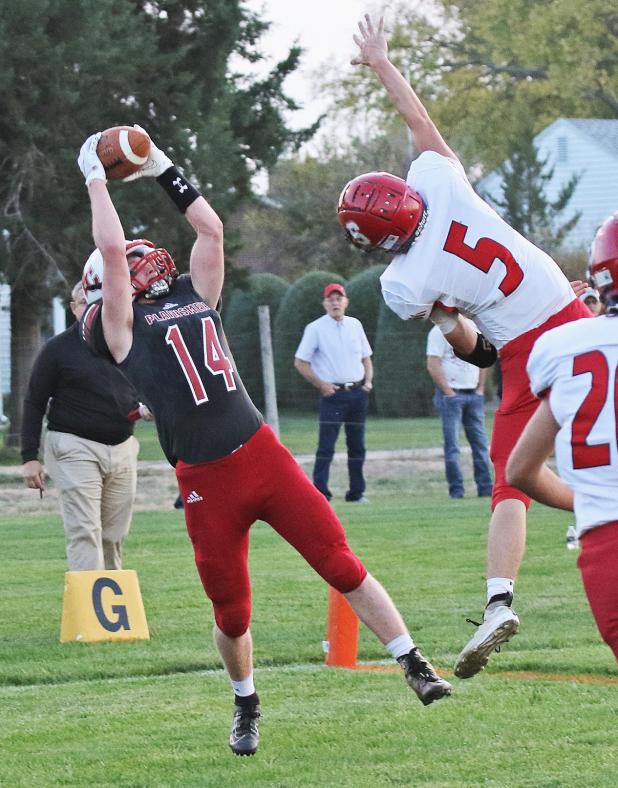 Hunter Garner goes up to pull a pass from Triston Hite that was thrown perfectly over the Sutherland defender for the Plainsmen’s first touchdown Friday. It was one of two receiving touchdowns for Garner.

For three quarters, the Perkins County Plainsmen stood toe-to-toe with the Sutherland Sailors in district action on Haenfler Field Friday.

They just couldn’t get it finished in the fourth quarter.

That’s when the Sailors put up three touchdowns to outdistance the Plainsmen 44-22.

Head Coach Tanner Collins said the Plainsmen plain whopped up on Sutherland in the first half.

Had it not been for a second quarter turnover, the Plainsmen could have gone into halftime up by two touchdowns. “It’s a whole different ball game then,” Collins said.

Instead, the Sailors converted the turnover into a score to  tie the game 16-16 going into half.

“We’re just not quite there physically,” Collins said, “I hope this is an eye-opener of just how important the weight room is,” he added.

That difference in physicality especially showed up in the fourth quarter when Sutherland put up three scores to pull away.

Despite losing the fourth quarter, Collins said  his kids showed more toughness and were able to battle through some bumps and bruises—something the team hadn’t shown in the face of adversity.

He sees that as a sign of the maturity and progress his team has made.

Now, they have to travel to Alma Friday night to put a cap on the regular season.

While Alma remains winless thus far, Collins said they have to go down there and take care of business.

Then, on Saturday, they’ll learn whether their progress has earned them a spot in the D1 playoffs.

Playoffs or not, Collins said this season has been a positive stepping stone in the growth of the program.