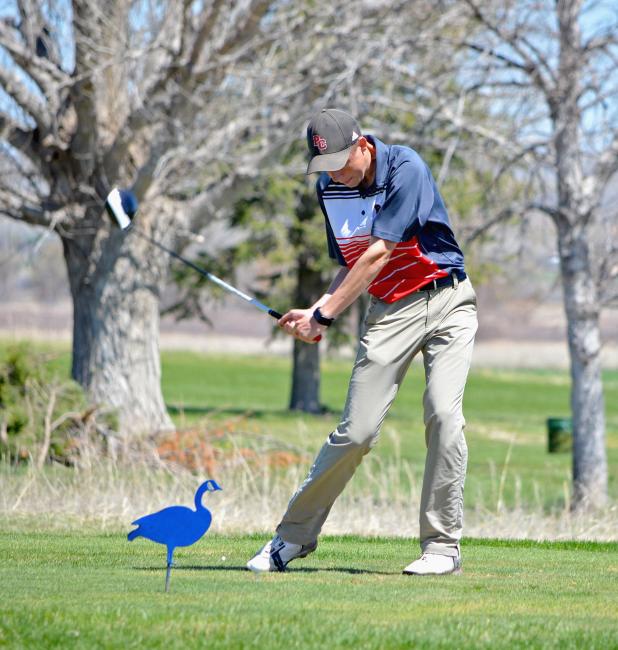 The Plainsmen had to overcome obstacles including winds and disqualifications but placed in the top five as a team at both meets.

The weather was in the upper 60s and the wind conditions were fair for the Garden County Invite last Tuesday, where seven teams competed on the golf course.

“The golfers hit the ball decently, but had trouble scoring,” Kemling said, adding, “We did not adjust well to the speed of the greens with either putting or chipping. When our scoring shots let us down, it is tough to put together any momentum.”

During the Garden County meet, Aaron Fay hit a drive into the driving range and couldn’t find it. After re-teeing, he found both his second ball, and his first. He played the first ball, which was not the ball in play due to it being declared lost. Since he didn’t finish the hole with a ball in play, he was disqualified.

“With his score, we would’ve come in first as a team, but it does serve as a good lesson to make sure the rules are followed,” Kemling said.

Perkins County still pulled out a third place win as a team at Garden County, with a final score of 422.

Garden County took first with 372, and Mullen came in second with a team score of 408.

Carson Thelander, also a junior earned the ninth spot after shooting a 90.

Also participating at the Garden County invite were Kaden Smith and Deitrik Brueggeman, juniors on the Plainsmen team. Smith finished the day just 12 strokes away from the top ten, 103 total swings.

Brueggeman shot a 145 for the day.

The wind blowing at 20-30 mph affected both the short and long game throughout the day.

“It was affecting putts, even blowing the ball uphill in some cases,” Kemling said.

Woodmancy took third place again at Enders, after 43 strokes on the first nine and 40 on the back.

Fay also had 83 for the day, earning him fourth place.

“I thought the guys did a nice job of improving from the first nine to the second. We made up ground on Kimball on the back nine, but didn’t have quite enough to beat St. Pat’s,” Kemling said.

He also said he was encouraged to see Fay handle the disappointment from earlier in the week and put in a solid performance.

“Kaden hit the ball great at times, but couldn’t keep it going. I’m optimistic that he will be able to put a good round together before the end of the season,” the coach added.

The Plainsmen will travel to Kimball for a 9 a.m. tee time on Thursday. Friday will see the Creek Valley invite that was moved from April 30 begin at 9 a.m.