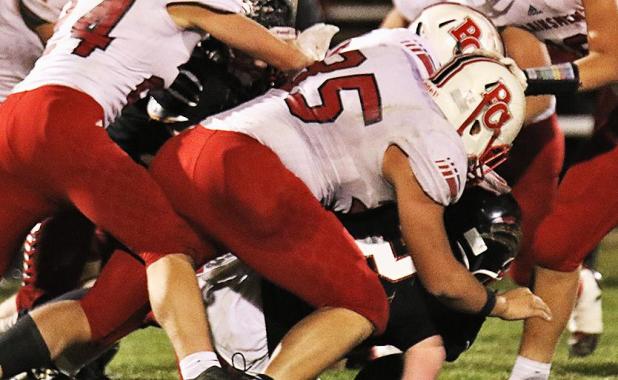 Brandon Knoles smothers a Hemingford ball carrier during the Oct. 2 contest. Knoles has led the team in tackles this season and shifted to the backfield this week, picking up 79 yards on 14 carries.

Plainsmen upset by Alma in finale

The Perkins County Plainsmen traveled to Alma Friday night, expecting to end the season on a high note. Instead, it was winless Alma celebrating after upsetting the Plainsmen 40-36.

Finishing 4-4 was a major step for the program after winning just three games the previous two seasons.

“We came out really flat,” Collins said. They’ve done that before but then put together a good game, he added

This time, the Plainsmen found themselves struggling through the whole first half.

After their first drive stalled, forcing a punt, the defense got the ball back for the Plainsmen.

Starting at their own nine, the Plainsmen marched down the field, converting a fourth down inside the 10. However, they couldn’t punch it in.

The defense forced an Alma fumble inside the five, only to have Alma fall back on top of it.

Then their quarterback slipped through numerous tackles for a 78-yard touchdown run and a 6-0 lead.

The Plainsmen didn’t field the ensuing kickoff and started on their own 5 yard line.

After failing to complete what would have been a touchdown pass, the Plainsmen were forced to punt.

The two teams traded possessions before the Plainsmen put together their first scoring drive.

Collins switched offenses, going to a double tight end I formation. Staying on the ground, the Plainsmen executed a 10-play, 58-yard drive. The conversion pulled them within six, 14-8.

Another defensive breakdown yielded a 41-yard quarterback keeper for Alma, setting up their third touchdown of the second quarter and a 20-8 lead going into halftime.

Alma got the ball to start the second half and needed just five plays to go 58 yards and open up a 26-8 lead.

Staying with the run, the Plainsmen answered by grinding out a nine-play, 65-yard scoring drive to pull within 10, 26-16.

Alma’s quarterback continued to shred the PC defense on the option read, scoring another touchdown just five plays later to give them a 32-16  lead.

That’s when the Plainsmenstarted their comeback.

After an eight-play rushing drive for a score to pull back within 10, 32-22, the defense produced back-to-back scores to put the Plainsmen up 36-32.

The first came after blocking an Alma punt and recovering it on the Alma 7. One play later, the Plainsmen were within two, 32-30.

After the kickoff, Jeb Kohl picked off an Alma pass and returned it 10 yards for the score and a 36-32 lead.

The defense forced Alma into a fourth down at midfield, only to give up a 17-yard completion to keep the drive alive.

That would turn out to be a key play in the ball game. One play later, Alma went 17 yards for the score to regain a 40-36 lead.