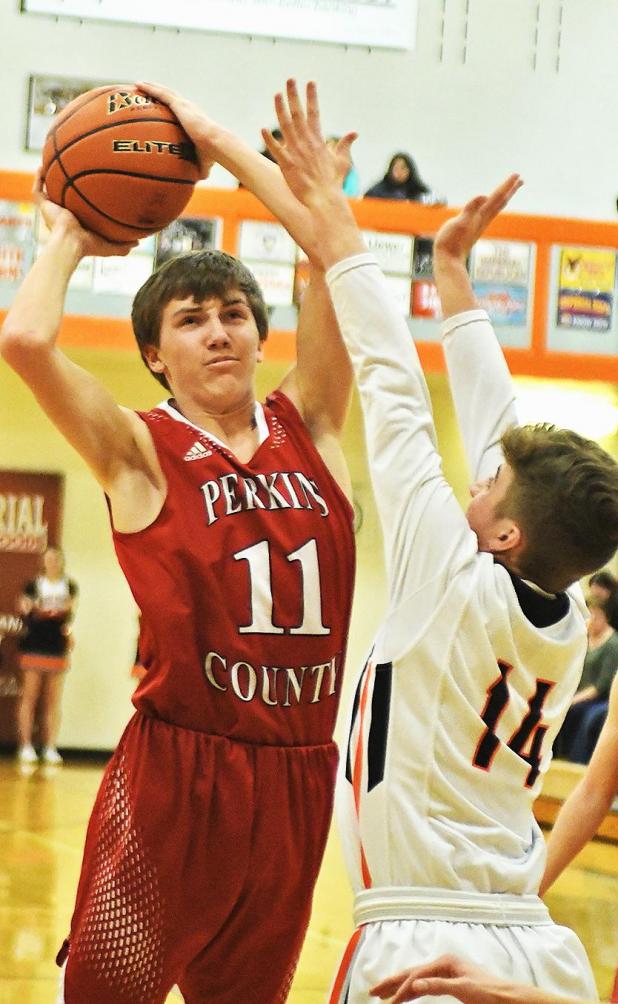 Senior Carson Thelander looks to put the ball in the net past the Longhorn defense. Thelander scored 6 points for the Plainsmen in the SPVA conference game against Chase County.

Plainsmen Coach Shawn Cole knows his team has to be able to score to win more games.

In a four-game stretch over the last two weeks that included two games in the SPVA conference tournament, the Plainsmen averaged 33 points per game.

As a result, they suffered a loss to Wauneta-Palisade sandwiched between a pair of losses to Chase County, one in regular season and one in the SPVA opener, followed by a loss to Sutherland in the SPVA.

Over the last four games, Cole said the Plainsmen have averaged just 37% shooting.

He knows his team is still young and will learn and build from their experience this year.

In the first game of the four-game stretch, Cole said the Plainsmen executed their defensive strategy against Chase County in the Plainsmen gym Thursday.

He said their goal was to pack it in tight underneath and force Chase County to beat them from the outside.

They held the Longhorns’ leading scorer to just one and limited their other inside player to just six.

Despite outside pressure, the Longhorns had the hot hand, making 12 of the 23 baskets from outside the three-point arc in the 62-26 loss.

On Friday, they traveled to Wauneta-Palisade, where they  only shot 33% from the field a 41-35 loss.

Cole said the Plainsmen had difficulty offering back side help on defense to stop W-P’s pick-and-roll offensive strategy.

In the opening round of SPVA Monday in Imperial against Chase County, Cole’s goal was to take away the inside.

They accomplished that goal but this time, the Longhorns absolutely went off from outside the arc.

They dropped a total of 17 trey balls, including nine from one player alone. It wasn’t that those shots weren’t contested; it was just that Chase County was dialed in and had one of those rare nights when everything dropped.

That loss put them against Sutherland in a consolation game in the tournament.

After falling behind 13-8 in the first quarter, the Plainsmen put up 14 points in the second while holding Sutherland to seven for a 22-20 halftime lead.

However, in the third quarter, the Plainsmen went scoreless. Fortunately, they held Sutherland to five to stay within three, 23-20.

The game remained close but the Plainsmen couldn’t close the gap and were forced to foul down the stretch.

Of Sutherland’s last seven points, five came from the free throw line to close out the Plainsmen 36-30.

Cole said the statistics show the Plainsmen are having more success inside with their offense. They went 7 for 10 inside the paint but were only 18% outside the arc and 35% percent inside the arc.

The 3-12 Plainsmen traveled to Holyoke, 2-8, Tuesday and will travel to Julesburg Thursday to face 9-0 Sedgwick County.