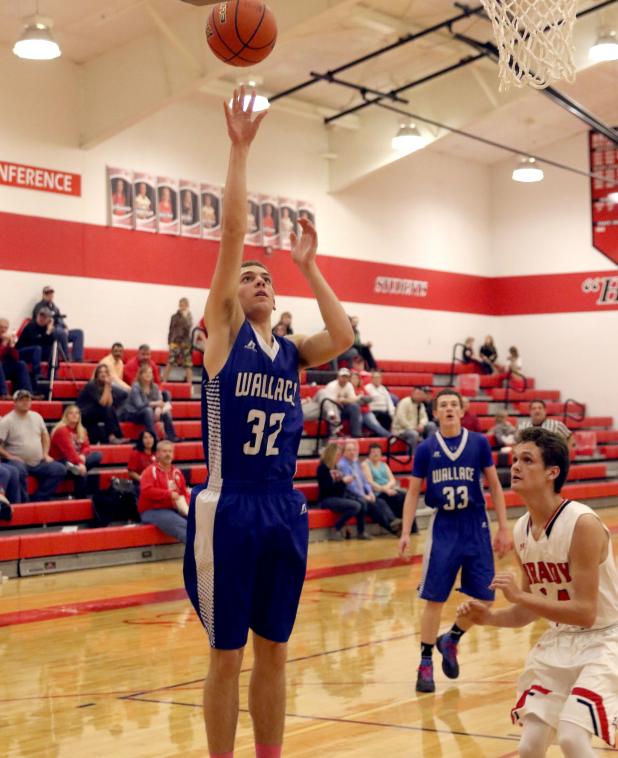 Wallace senior Robbie Nelson on the fast break for two in the game vs. Brady.

Wallace was back on the road last Tuesday when the team traveled to Brady to compete against the Eagles. An afternoon drive must have been just what the Wildcats needed because they came out to put on a dominating performance.

As the game got underway, the Cats were off an running and shooting lights out. Brady put up the first three points but then the Big Blue took over with seven unanswered points. And so it went, with each basket that the Eagles made, the Wildcats responded with four or five of their own.

When it was all said and done in the first quarter, Wallace had put up 31 points. Ty Maline had 11 points, Jared Sullivan and Jacob Melton each had eight and Robbie Nelson and Micah Swedberg each chipped in two points.

The Cats had a 31-11 lead and they added to that lead during the second quarter. Wallace added another 13 points to scoreboard complements of four points from Melton and Blake Pelster, three from Daniels and two from Maline.

With a 44-16 lead, Wallace was looking to put together another solid half, and that is what they did.