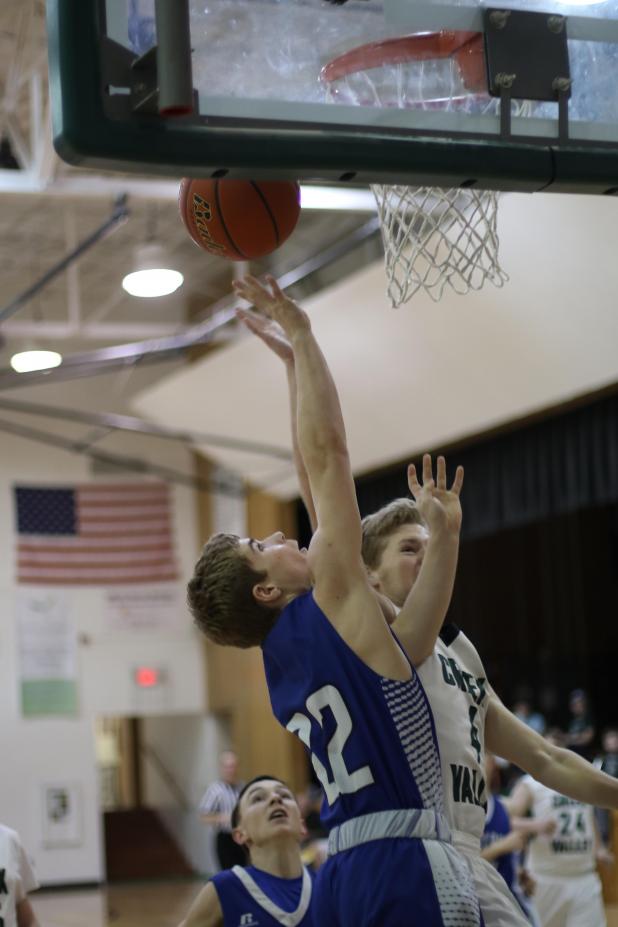 Carson Glunz, a Wallace sophomore, leads the fast break ahead of the Storm’s #4, Caleb Mahon, a senior, and takes it directly to the basket.

And just like that, the Wallace Wildcats have played the final game of their regular season.

The Cats traveled to Chappell to take on the Creek Valley Storm last Friday. They were looking for a big finish to the season to propel them into district play.

Wallace did not get off to a good start and by the end of the first quarter, they found themselves trailing the Storm 13-8.

Basketball fans saw an increase in the action during the second quarter. Both teams settled into their offensive game and put a lot more points on the board.

Alec Messersmith and Camden McConnell helped cut into Creek Valley’s lead by knocking a couple of greatly needed 3-pointers. The Storm, however, were able to go to the locker room clinging to a 29-26 lead.

McConnell got things off to a good start in the third by draining a long ball to tie the game. Shortly after, Kolton Hager added a deuce to take the lead and the Wildcats never looked back.

With the offense rolling and the defense playing tough, Wallace as able to take a 42-35 lead into the final period.

Once the Cats found their rhythm, they were able to dominate the entire second half. Their stingy defense held the Storm to 18 points while their offense put up an impressive 38 second-half points. The combination gave Wallace the 64-47 victory.

Carson Glunz and Trey Robertson each scored 2 to round out the scoring.

The second-seeded Wildcats, 13-7, were scheduled to play Brady, 11-11, on Tuesday in the first round of the D2-10 subdistricts. The tournament is being played at North Platte St. Pat’s.