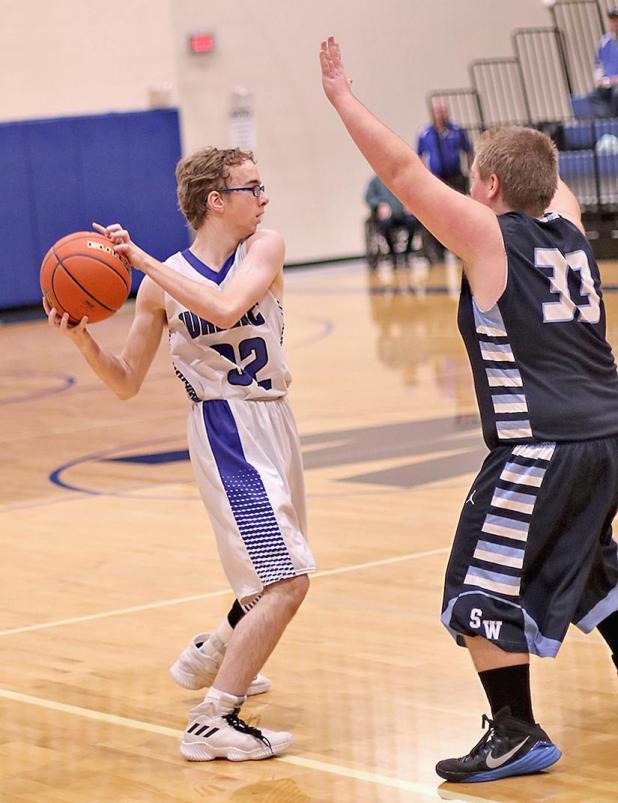 Brian Brown, a Wallace sophomore looking to get the ball closer to the basket past the Southwest defense.

As the Wallace Wildcats approach district play, they are winding up their regular season with the final three games. Two of those three games were played last week when the Cats did battle with Southwest Roughriders and the Hitchcock County Falcons.

Wallace hosted Southwest Tuesday, Feb. 11. The Roughriders are a young team and the Wildcats attacked their inexperience in the opening quarter.

Six different Cats put points on the board due in part to their tough defensive play. The game plan gave Wallace a commanding 20-5 first quarter lead.

Southwest settled down and had a better second quarter but the Wildcats still had the upper hand. After putting up eight points in the first quarter, Kolton Hager put up the first two points in the second.

From there, the Cats put on a 3-point clinic. Ethen Bowlin knocked down the first and the Camden McConnell went off with three treys in a row.  By halftime, Wallace held a 36-16 lead.

Wallace continued to dominate in the second half. After the two teams exchanged baskets to start the third period, the Wildcats went on a 13-point run to extend their lead. Going into the final period they had a 30-point lead.

The Roughriders had a strong fourth quarter as they were able to put 18 points on the board.  The Wildcats continued to play well too, however, and they put up an additional 20 points to make the final score 73-41,

Friday the Wildcats traveled to Trenton for a much more challenging game as they took on the 13-6 Hitchcock County Falcons.

As the game got underway, the Falcons made it clear that they were ready to compete. They jumped out to a 14-5 lead but the Cats put up the last two baskets in the quarter narrowing the deficit to 14-9.

Hitchcock County was quick to respond as they started the second with seven unanswered points. Wallace quickly regrouped and battled with the Falcons the remaining seven minutes.

They put up a seven-point run of their own toward the end of the period but Hitchcock County was able to take an 11-point lead into halftime.

The second half started out with 3-pointers. The Falcons drained the first one and then Wallace responded with one each from Hager and Robertson. Shortly after that, Messersmith got a put-back but then the Wildcats went cold.

Hitchcock County ended the third quarter with a seven-point run to extend their lead to 48-33.

Wallace could have folded with frustration but they didn’t panic and played tough basketball.

While their shots started to fall again in the fourth, they weren’t able to stop the aggressive Falcon inside game. The Cats were able to put 17 additional points on the board but they were only able to hold Hitchcock County to 16.

In spite of a valiant effort, Wallace was defeated by the Falcons by a score of 64-50.

Tanner Finley added 6, Nyamakope and Messersmith each with 4, Robertson 3 and Bowlin 2.

Wallace will conclude their regular season this Friday when they travel to Chappell to take on Creek Valley. The JV game is scheduled for 5:00 with the varsity to follow.

The Wildcats will play in the subdistrict tournament next Tuesday at North Platte St. Pats. The 12-7 second-seeded Wildcats will face third-seeded Brady, 10-11, at 7:30 p.m. CT.