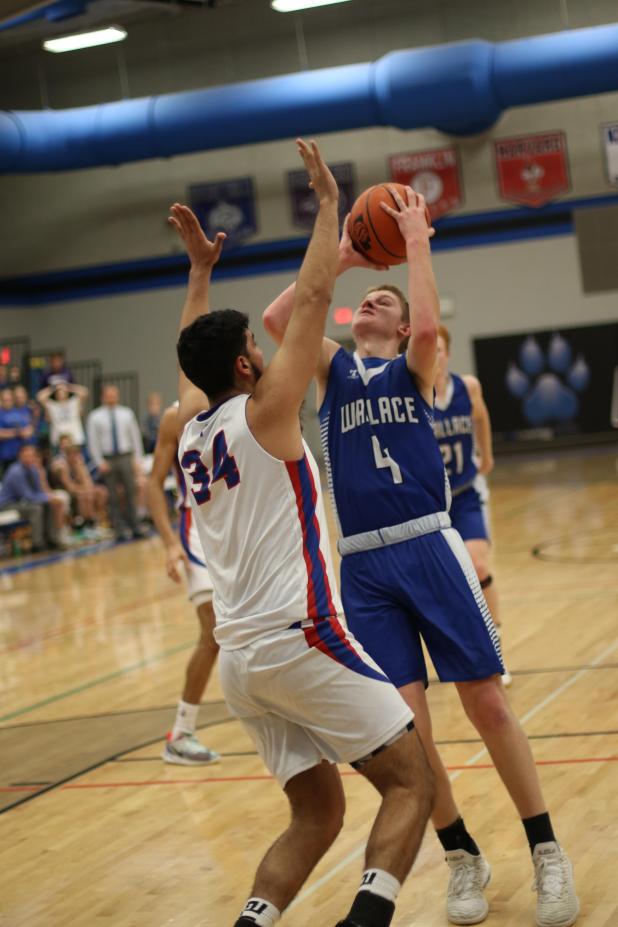 Kolton Hager carried the scoring for the Wildcats in their district final agasinst Parkview Christian, finishing with 25 points.

The Wallace Wildcats completed an outstanding season that led them to a district final game against an experienced and tall Parkview Christian team.

The Cats gave their best effort but struggled with the Patriots’ relentless defense throughout the game.

The game got off to a slow start as both teams appeared to be dealing with ‘big game’ jitters. Shots weren’t falling and there were a number of turnovers. By the end of the low scoring first quarter, Parkview Christian held a 10-2 lead.

Things were looking bleak for the Wildcats when the Patriots put up the first eight points of the second quarter.  The Wildcats had only been able to get two free throws in the books at that point but they were continued to work hard.

As the quarter progressed, Kolton Hager led the Cats by scoring 10 points which matched the remaining points the Patriots scored.

Just before the halftime buzzer sounded, Alec Messersmith got a bucket but Wallace still had half as many points as Parkview with the scoreboard reading 28-14.

The third quarter proved to be a rough one for the Wildcats. Hager knocked down five free throws early in the quarter but those ended up being the only points the Cats could put on the board.

Parkview went on to score 14 unanswered points to expand on their lead.

By the time the final period was underway, the Patriots held a 20-point lead they continued to build on.

Early in the quarter, the Patriots put up 6 unanswered points. Wallace, however, never gave up and late in the game, they outscored Parkview 12-2.

However, their efforts were far short of what they needed as the scoreboard read 58-33 at the final buzzer.

The score didn’t serve as any indication of how hard the Wildcats played.

“We knew we had a tall task in front of us. Our guys came in confident and worked hard the whole game and gave it their all,” Coach Eric Miller said. “The boys should be proud of the way they represented themselves and the school.”

In spite of a lot shots being put up, not many fell for the Cats as the scoring stats indicate.

Kolton Hager was the lone Wildcat able to get shots to fall. He ended with 25 points, 11 of which were free throws. He also pulled down five rebounds, two assists and two steals.

Coach Miller was proud of his young squad and the way they progressed and improved through the season.

He summed up the season with these words, “Coming into the year, we didn’t know what to expect. We knew we were young, but we didn’t want to use that as an excuse for anything.

“The guys came to practice every day with good attitudes and willing to work.  That work ethic helped them accomplish a lot of things this year.”

He said making it to the district final was a major accomplishment for this team.

“We had a blast this season and want to thank everyone that supported us through it,” he added.