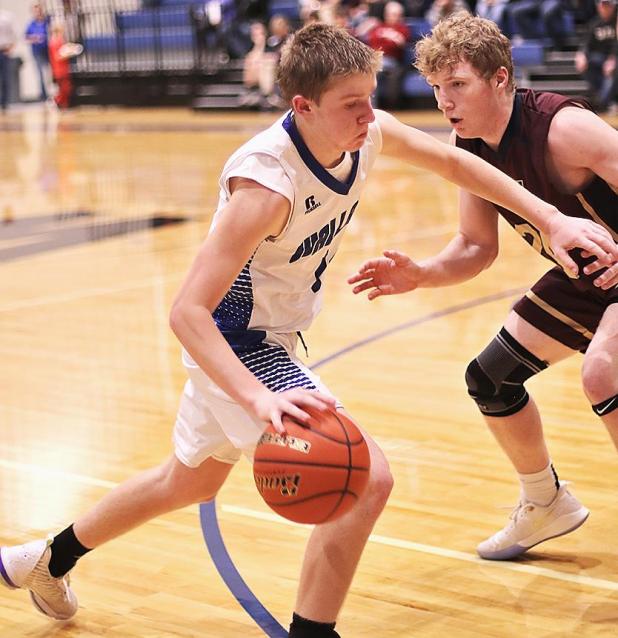 Wallace sophomore Kolton Hager makes a drive to the basket past Dundy County Stratton’s Michael Fredrick. Hager finished with 13 points and scored 24 in their game with Wauneta-Palisade.

As Wallace geared up for the RPAC tournament, they first had to face 10-1 Dundy County Stratton.

The Wildcats did not play like they were the underdogs, outscoring the Tigers in the first half with seven different players putting points on the board.

Kolton Hager set the pace in the opening quarter with two baskets and four free throws. Camden McConnell got hot in the second quarter hitting a jump shot and three 3-pointers. With the shots falling, Wallace took a 33-27 lead into halftime.

The third quarter proved to be a rough one for the Wildcats.The Cats struggled offensively, scoring just five points while the Tigers went off for 18.

The Wildcats woes carried into the beginning of the 4th quarter as DCS scored the first 10 points. The Big Blue didn’t fold, outscoring the Tigers six to one late in the quarter. However, it was too little too late with Wallace falling, 59-46.

Hager and McConnell shared scoring honors, each with 13. Hager added five rebounds and four assists to his stats while McConnell had one rebound, one assist and one steal.

Alec Messersmith had five points, Ethan Bowlin had two 2 points and Trey Robertson rounded out the scoring with one.

Wallace began preparing for their second game of the year against Wauneta-Palisade.

The two teams faced off in the season opener and were set for a rematch in the opening round of the RPAC tournament at Maxwell.

The Broncos jumped out to a quick 6-0 lead. The Cats responded, however, with an Bowlin dropping a 3-ball and Hager getting a putback.

The remainder of the quarter was an exchange of baskets which resulted in a 12-12 tie at the buzzer. The basket exchange continued into the second quarter for the most part.

However, late in the quarter, it was one basket for Wallace and two for the Broncos. The late surge gave the Broncs a 29-21 halftime lead. The Wildcats lost Bowlin due to an injury but regrouped and played a very good third quarter. They held the Broncos to six points while the offense found ways to get points on the board.

Down by just four points, the Cats were hoping to carry the momentum into the final period. After W-P hit the first basket, Wallace went on a seven- point run and took the lead with a Hager 3-pointer.

The Big Blue celebration was short-lived as the Broncos quickly responded with a 3-ball of their own. The Broncs hit one extra basket and then made their free throws at the end to seal the victory with a score of 50-43.

The RPAC tournament will continue throughout the week. The second round will be played in Hayes Center on Tuesday where Wallace will play Maywood-Hayes Center for the third time this season.

Round three will take place in Trenton on Friday and then the finals will be held in McCook at the college on Saturday.

Wallace will get back to regular-season games on next Tuesday when they host the Brady Eagles. They will follow that up with a trip to Maxwell on Friday, Feb. 7.