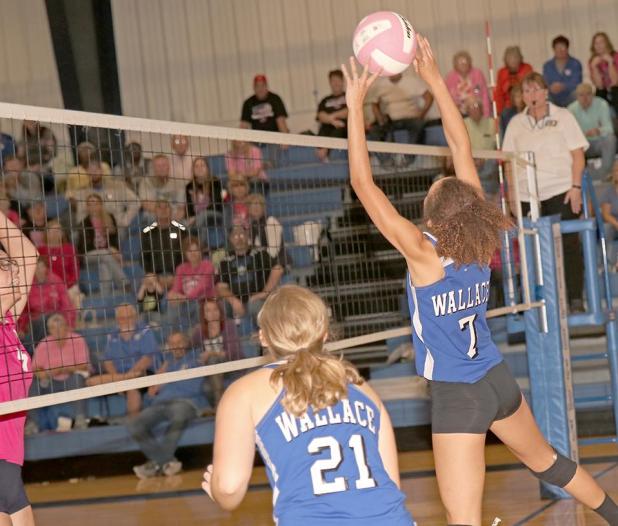 Sophomore Arianna Davie, Number 7, puts the ball down on the other side of the net.

Coach Elizabeth Hock said it was a great team effort. “Our bench players came in and played well. The girls were able to carry over and display the skills we worked on in practice this week,” she said.

The annual Pink Out was held during the game, and over $750 was raised for Memories For Kids. Memories For Kids is a nonprofit organization whose mission is to create lifelong memories for children who have a parent with stage IV cancer.

The team played in a triangular on Monday, Oct. 8. They lost to Garden County in two close sets, 20-25 and 21-25. Coach Hock said it was a good effort by the girls, but they got complacent at some point. “We are working on competing consistently throughout each match.”

Wallace won their game against Potter-Dix, 25-22 and 25-21. Hock said they played aggressively throughout the match. “We have to learn how to continue competing even when we are in the lead. Our net play tonight was once again much improved over the earlier parts of the season.”

The ladies will host Wauneta-Palisade this Friday. RPAC will be Monday and Tuesday, Oct. 15-16.

The cross country team competed at RPAC in Southern Valley on Thursday, Oct. 4. Results were unavailable. Districts will be Thursday in Bridgeport.

The Wallace Wildcats had to forfeit their game for the third consecutive week.