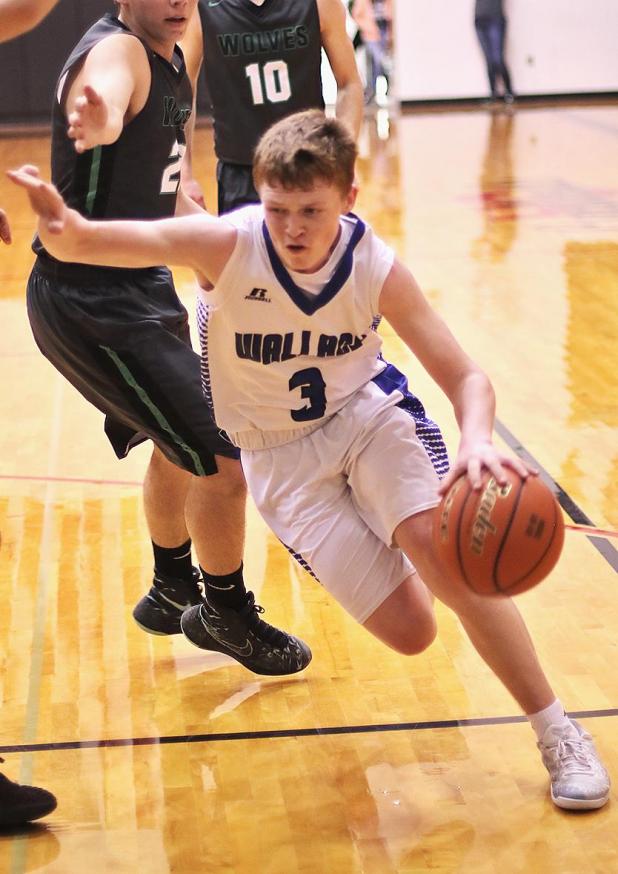 Sophomore Camden McConnell drives the lane against Maywood/Hayes Center He shared scoring honors with 12 and finished with 20 against Maxwell in RPAC action last week.

The week-long RPAC basketball tournament consumed the final week of January. Wallace fell to Wauneta-Palisade in the opening round, setting them up with a third meeting with Maywood-Hayes Center Jan. 28.

With each team having a win in the two previous meetings, it was expected the third competition would be close, and close it was.

Wallace had the upper hand in the opening quarter as they jumped out to an 11-6 lead. The second quarter, however, belonged to the Wolves.

The Wildcats were only able to get two baskets and three free throws in the quarter. Maywood-Hayes Center, on the other hand, dominated the inside game. They knocked down six baskets in the lane to take a 19-18 halftime lead.

The Wolves carried their momentum into the third quarter as they once again outscored the Wildcats.

Alec Messersmith was able to knock down two 3-pointers and Tanner Finley got a bucket off a steal but that is all Wallace could put on the board The Wolves went into the final period with a 32-26 lead.

Wallace saved their best for last. Not only did they get shots to start falling, but they also stepped up their defense. Their full-court press created quite a few turnovers which helped them chip away at the Wolves lead.

The last three minutes of the game went back and forth with three lead changes and then a tie score with 1:30 remaining.

Both teams battled for additional points but to no avail.

The Wolves looked like they might get the last shot. They put the ball up with 5 seconds on the clock but it didn’t fall. Tanner Finley came down with the rebound and was fouled.

With 2.8 seconds left, Finley went to the line for a free throw. He was able to get the first one to fall but the second free throw was off the mark. The Wolves grabbed the rebound, they only had time for a half-court shot which fell short giving Wallace a 41-40 come-from-behind victory.

Statistically, the Wildcats were led by Camden McConnell and Messersmith, each with 12 points. McConnell added three rebounds, three assists and five steals while Messersmith had five rebounds, two assists, and two steals.

Kolton Hager had 5 points with  Tertullian Nyamakope and Trey Robertson each had 2. Nyamakope also grabbed an impressive 12 rebounds.

With the win, the Wildcats earned the opportunity to play in the third round of the tournament.

On Friday, they traveled to Trenton where they faced the Maxwell Wildcats.

The final game, like the previous ones in the tournament, went back and forth. It wasn’t until the fourth quarter, that Wallace was able to pull away and seal the 59-47 victory.

Coach Eric Miller stated, “I was proud of our guys for fighting back every time Maxwell came back to tie it, or even take the lead.  Our young team has shown growth and maturity over the course of the season.”

McConnell led the way for Wallace with 20 points, six rebounds, one assist, and three steals. Kolton Hager also had an outstanding game with 17 points, four rebounds, five assists, two steals, and a block.

In the championship game, DCS squeaked out a 40-38 win over Southern Valley. In the third place game, Paxton defeated Alma 54-30.

Wallace got back to regular season play by hosting Brady Tuesday night. Friday, the Wildcats will travel to Maxwell for a rematch. Next Tuesday, they play host to Southwest.