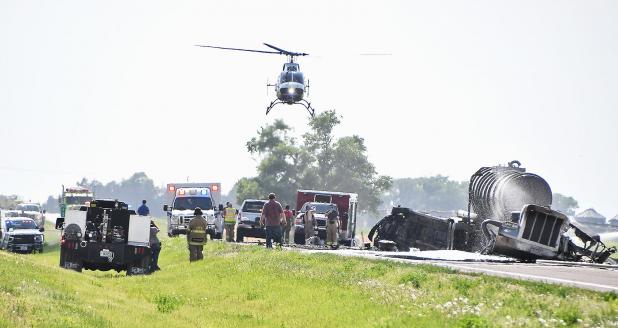 A helicopter prepares to land on Highway 6 in anticipation on transporting Clayton Giesbrecht.

The life of Clayton Giesbrecht, 49, of Madrid was claimed in a two-vehicle accident seven miles west of Imperial last Monday, July 1.

Giesbrecht owned C&S Construction. He was well-known in Perkins County and the surrounding areas for his work.

His obituary stated his customer and employee relationships developed into lifelong friendships.

One such example is Nate Pouk of Grant, who worked for Giesbrecht for 16 years and has known him for 20. Pouk said he wouldn’t even know where to start when describing the kind of person Giesbrecht was.

“He was a great man, a great employer and had a very big heart,” he said.

Giesbrecht had been traveling westbound on Highway 6 when a semi, driven by Brad Kosinski of Eckley, Colorado, crossed the center line and struck the front driver’s side of Giesbrecht’s vehicle, turning it on its side.

The semi was pulling an empty tank, and upon collision, the tractor’s fuel tank caught fire.

Kosinski escaped the burning cab, while Giesbrecht was trapped inside his pickup.

Upon arrival, they found the semi-truck fully engulfed in flames. Using their jaws equipment, IVFD cut Giesbrecht from his pickup.

He was transported to the Chase County Community Hospital, where he succumbed to his injuries.

A helicopter was flown in, which landed directly on the highway.

“The original plan was to fly Clayton directly out to another hospital, but due to his condition, he was transported by ambulance to [CCCH],” Chase County Sheriff Kevin Mueller said.

Kosinski was treated at the hospital and released with minor injuries.

Highway 6 was closed for about five hours Monday afternoon. Traffic was rerouted north on country roads.

Nebraska Department of Roads also responded to the scene to assist with traffic.

The accident occurred near the home and farm of Dale and Elisa Large.

Elisa had just left the house when she heard a loud bang.

Kevin Klahn, a hired man for the Larges, called 911 and relayed information to authorities.

Large received some “very light scratches” on her forearm. “I was in the back window holding [Giesbrecht’s] hand and trying to keep him still,” she said.

Large and another hired man, Geoff Beemer, were on the scene until authorities arrived.

This story is one of three in a series: "Community mourns 3 tragic deaths in 3 separate incidents". Click here for Justin Borowski and here for Elijah Oliver.